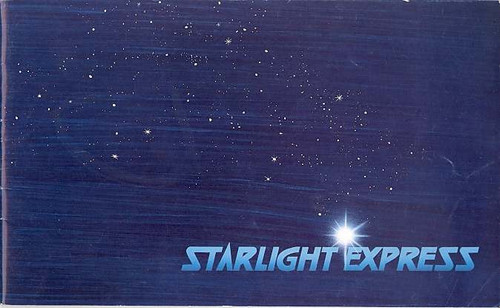 Starlight Express is a rock musical by Andrew Lloyd Webber (music), Richard Stilgoe (lyrics) and Arlene Phillips (choreography), with later revisions by Don Black (lyrics) and David Yazbek (music and lyrics for the 2nd US tour). The story follows a child's dream in which his toy train set comes to life; famously the actors perform wearing roller skates. It is one of the longest running musicals in West End history with 7,461 performances, but the Broadway production only ran for 761 performances. During the 1970s, Lloyd Webber planned to produce a musical movie adaptation of Rev W. Awdry's Railway Series books. This fell through, as Awdry felt that Lloyd Webber wanted a greater degree of creative control than he was prepared to give. A legacy of this early scheme is the Really Useful Company, named in reference to a catchphrase used in several of the books. Lloyd Webber was interested in developing the idea of a musical about trains further, and conceived what he described as "a Cinderella story" in which Rusty stands for Cinderella, and Greaseball and Electra, the stepsisters. The Starlight Express itself fills the role of the fairy godmother. Starlight Express musical, also directed by Trevor Nunn, is similar in its theatrical concept to Cats in that it also features dancers in costume representing non-human characters. However, unlike Cats, the music is mostly in the realm of disco and pop with one or two pastiche songs such as the Country and Western styled "U.N.C.O.U.P.L.E.D.", love duet "Only You" and the title song, "Starlight Express". In some ways this musical could be seen as more of a return to the style of Joseph, although the latter was more varied in its use of musical styles and influences.