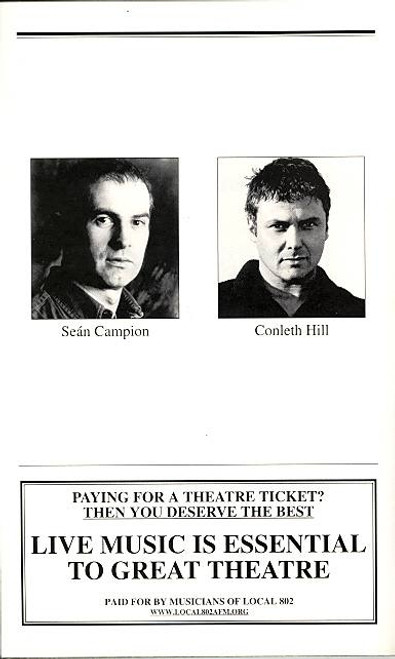 Stones in His Pockets is a two-hander written in 1996 by Marie Jones for the DubbleJoint Theatre Company in Dublin, Ireland.. It’s a complex study of winners, losers and lost dreams all played out in paradise – at least that’s the way it looks on the surface. The drama is set in a rural town in County Kerry Ireland that is overrun by a Hollywood film crew. The story centers on Charlie Conlon and Jake Quinn, who, like much of the town, are employed as extras for the filming. Much of the comedy of the play is derived from the efforts of the production crew to create the proper "Irish feel", a romanticized notion that often conflicts with the reality of daily life, and that it calls upon the cast of two to perform all 15 characters (men and women), often switching gender and voice with swift dexterity and the absolute bare minimum of costume changes - a hat here, a jacket there. The key point in the play is when a local teenager commits suicide, by drowning himself with stones in his pockets, after he is humiliated by one of the film stars. The set design, by Jack Kirwan, is also simple - a backcloth depicting the cloudy sky above the Blasket Islands, a row of shoes (symbolising the myriad characters) and a trunk, a box, and two tiny stools. The lighting design was originally by James C. Mcfetridge and this design was used in both the London West End and the Broadway versions of the shows.