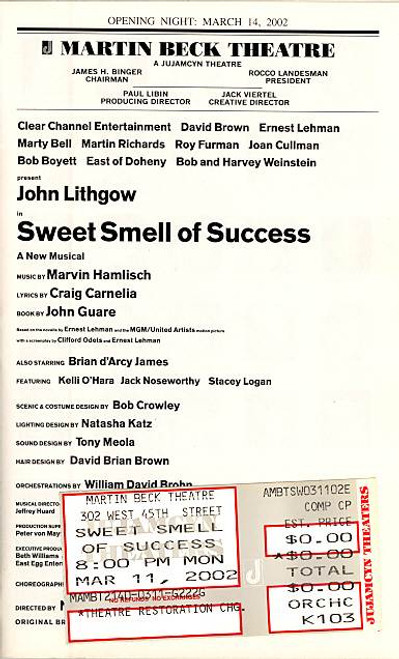 Sweet Smell of Success is a musical created by Marvin Hamlisch (music), Craig Carnelia (lyrics), and John Guare (book). The show is based on the 1957 movie of the same name, which tells the story of a powerful newspaper columnist named J. J. Hunsecker (based on famed New York columnist Walter Winchell) who uses his connections to ruin his sister's relationship with a man he deems inappropriate. The musical opened on March 14, 2002 at the Martin Beck Theatre on Broadway. Again directed by Hytner, it closed on June 15, 2002, after 109 performances and 18 previews. The show starred John Lithgow as J.J. Hunsecker, and Brian d'Arcy James as Sidney Falcone. The creative team included choreography by Christopher Wheeldon, sets and costumes by Bob Crowely, and lighting by Natasha Katz. Sweet Smell garnered 7 Tony Award nominations including Best Musical. John Lithgow received the show's only Tony Award, winning Best Performance by a Leading Actor in a Musical.