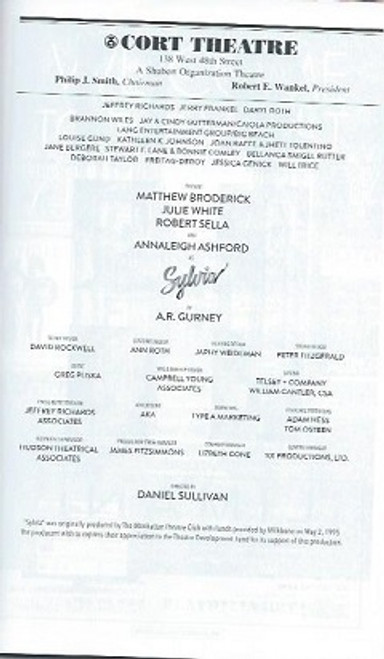 Sylvia is a play by A. R. Gurney. It premiered in 1995 Off-Broadway. The subject is "Sylvia", a dog, the couple who adopts her, and the comedy that results. Sylvia opened Off-Broadway at Stage I of the Manhattan Theatre Club on May 2, 1995, where it ran for 167 performances. Directed by John Tillinger, the cast included Sarah Jessica Parker as "Sylvia", Blythe Danner, and Charles Kimbrough. The production received Drama Desk Award nominations for Outstanding Play, Outstanding Actress in a Play (Parker), and Outstanding Costume Design (Jane Greenwood).

The play was produced by the Berkshire Theatre Group, Stockbridge, Massachusetts, in July 2011. The reviewer called it a "comic masterpiece".
The play's first Broadway production began previews at the Cort Theatre on October 2, 2015, starring Annaleigh Ashford as "Sylvia", Matthew Broderick, Julie White and Robert Sella, directed by Daniel J. Sullivan. The production officially opened on October 27, 2015 and ran a limited engagement through January 24, 2016. Costumes were designed by Ann Roth. The Broadway production announced that it was closing three weeks early, due to poor ticket sales.