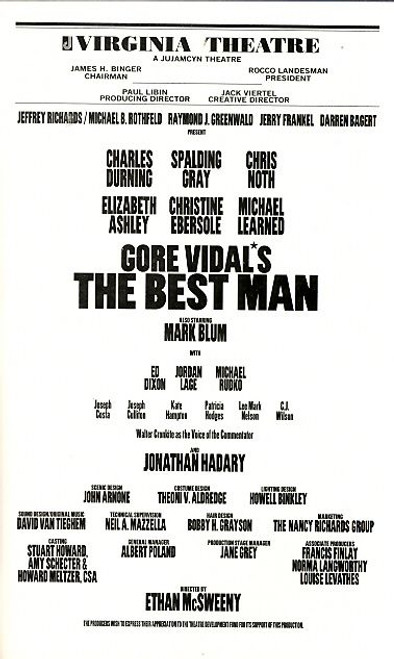 The Best Man is a 1960 play by American playwright Gore Vidal. The play premiered on Broadway at the Morosco Theatre on March 31, 1960, and ran for 520 performances before closing on July 8, 1961. Vidal adapted it into a film with the same title in 1964. Ronald Reagan auditioned without success for the lead in the play's original run. Vidal did not think he could play a credible president. James Earl Jones is attached to the spring 2012 revival. William Russell, a wit and scholar with high liberal principles, and Joseph Cantwell, an ambitious and hard-driving senator, are in a heated race for their party’s presidential nomination. Ex-President Arthur Hockstader, who loves politics for its own sake, is determined to have the final say in the selection. Gore Vidal’s play examines the nature of people who are drawn to power, and the lengths they might go to obtain the highest office in America. The Virginia Theater was renamed on October 16, 2005 in honour of American playwright August Wilson. Now the August Wilson Theatre. Gore Vidal*s The Best Man (Sep 2000) Charles Durning, Chris Noth, Elizabeth Ashley, Michael Learned-Virginia Theatre.