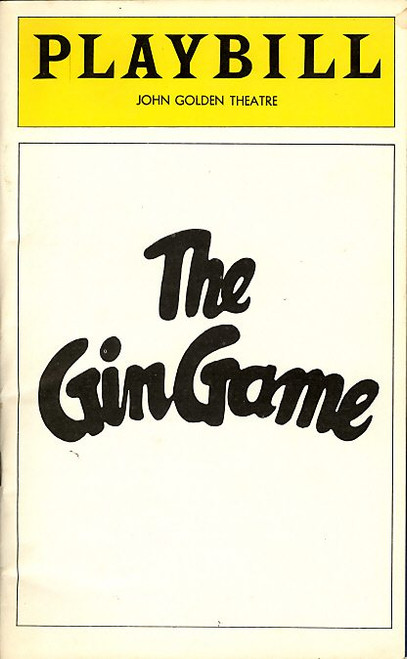 [The Gin Game is a two-person, two-act play by D.L. Coburn that premiered at American Theater Arts in Hollywood in September 1976, directed by Kip Niven. It was Coburn's first play, and the theater's first production. The Gin Game opened on Broadway on October 6, 1977 at the John Golden Theatre and ran for 517 performances. The play was directed by Mike Nichols and starred the married couple Hume Cronyn and Jessica Tandy. The play has come to be closely associated with them. Jessica Tandy won the 1978 Tony Award -- Best Actress in a Play. Cronyn and Tandy were replaced in the original Broadway run by E.G. Marshall and Maureen Stapleton. It was produced in the United Kingdom in 1999 with Joss Ackland and Dorothy Tutin at the Savoy Theatre, directed by Frith Banbury. It was revived on Broadway in 1997 at the Lyceum Theatre where it ran for 145 performances. Charles Durning and Julie Harris co-starred, directed by Charles Nelson Reilly. It received Tony Award nominations for Best Revival of a Play, Leading Actress in a Play and Direction of a Play. Maureen Stapeton, E. G. Marshall Directed by Mike Nichols.