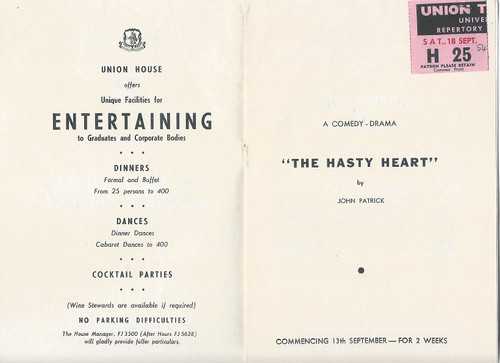 The Hasty Heart tells the story of a group of wounded Allied soldiers in a Pacific theatre mobile surgery unit immediately after World War II ends who, after initial resentment and ostracism, rally around a loner, unappreciative Scottish soldier they know is dying.

John Patrick - He was born John Patrick Goggin in Louisville, Kentucky. His parents soon abandoned him, and he spent a delinquent youth in foster homes and boarding schools. At age 19, he secured a job as an announcer at KPO Radio in San Francisco, California, marrying Mildred Legaye in 1925. He wrote over one thousand scripts for the Cecil and Sally radio program (originally titled "The Funniest Things"), broadcast between 1928 and 1933. The show's sole actors were Patrick and Helen Troy. In 1937, Patrick wrote adaptations for NBC's Streamlined Shakespeare series, guest-starring Helen Hayes.

Patti LuPone Matters of the Heart