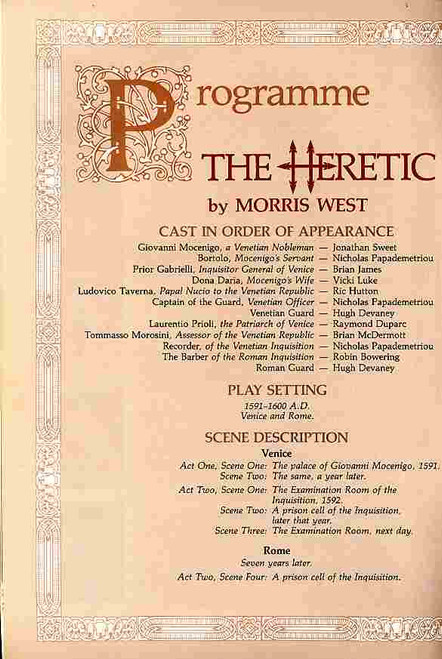 MORRIS WEST sees his new play The Heretic as a logical step in his evolution as a writer. Based on historical documents, it traces the decline and fall of Giordano Bruno, the 16th century scholar who was denounced by the authorities as a heretic a n d subsequently burned alive at the stake—a protester ahead of his time who could not wholly accept the orthodoxy of the Establishment in his own day.

Morris born in Melbourne in 1916, he joined the Christian Brothers when he was still in his teens. Later he decided the religious life was not for him.

During World War II he served with the Australian Army. Then he moved into radio, working as a scriptwriter, director, producer. A stint in Southern Italy resulted in Children of the Sun, a brilliant and hard-hitting expose of the squalid conditions in which the street urchins of Naples lived and begged.

This Souvenir Broucher is from the Sydney Opera House 1985 Production.

Souvenir Brochure
Size 200 x 290 mm
Information and pictures from the show and cast a must for any collector.
Condition: Good 8/10