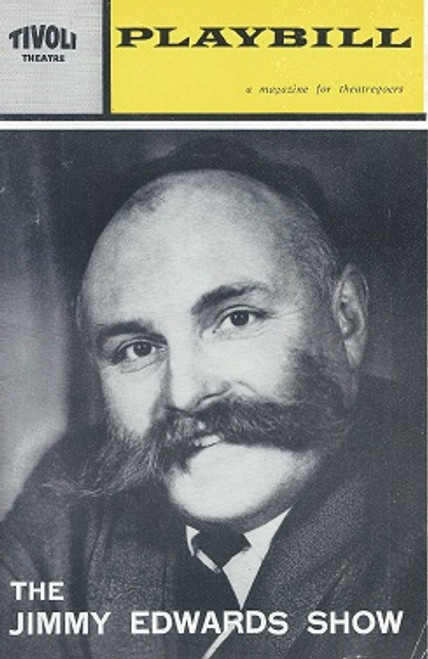 James Keith O'Neill Edwards, DFC (23 March 1920 – 7 July 1988) was an English comedy writer and actor on radio and television, best known as Pa Glum in Take It From Here and as headmaster "Professor" James Edwards in Whack-O!.

n December 1958, Jimmy Edwards played the King in Rodgers and Hammerstein's Cinderella at the London Coliseum with Kenneth Williams, Tommy Steele, Yana and Betty Marsden Bobby Howell was the Musical Director. In April 1966, he played at the last night of Melbourne's Tivoli Theatre. His final words closed a tradition of Australian music hall. "I don't relish the distinction of being the man who closed the Tiv. Music hall's dead in Britain. Now this one's dead, there's nowhere to go. I'll either become a character comedian or a pauper."
Edwards frequently worked with Eric Sykes, acting in short films that Sykes wrote: The Plank (1967), which also starred Tommy Cooper; alongside Arthur Lowe and Ronnie Barker in the remake of The Plank in 1979; and in Rhubarb (1969), which again featured Sykes. The films were not silent but had no dialogue other than grunts. He also appeared in The Bed Sitting Room (1969) as Nigel, a man who lives in a left luggage compartment after being mistaken for a suitcase.
Edwards and Sykes toured British theatres with their farce Big Bad Mouse which, while scripted, let them ad lib, involve the audience and break the "fourth wall". The show initially had a six-week run at the Palace Theatre, Manchester during which Edwards and Sykes had followed the script, with these performances greeted with universally poor reviews. Sensing that cancellation was imminent Edwards told Sykes that he intended to "have a bit of fun" with the show and for what was expected to be the last week of the run the two stars began to deviate heavily from the script. However the new, more improvised version proved a success with audiences and led to a long run for the show at the Shaftesbury Theatre. Sykes was replaced by Roy Castle in later runs in its three-year residency at the Shaftesbury Theatre in London's West End and in tours of the Middle East and Australia. Edwards and Sykes also performed the show for Rhodesian troops at the request of the country's prime minister, Ian Smith, a controversial event at the time. Edwards also starred in the stage revival of Maid of the Mountains.