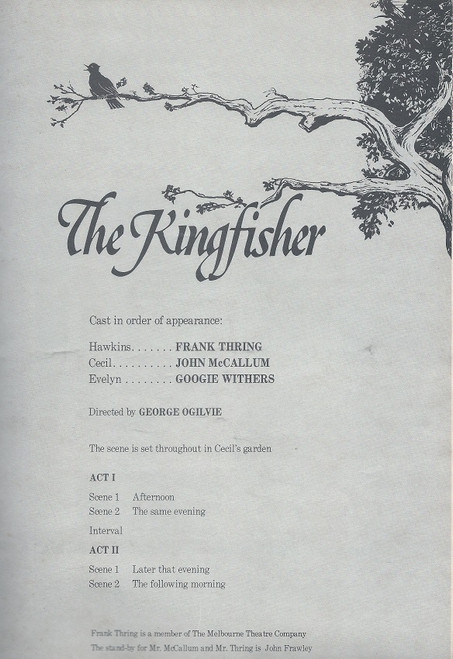 The Kingfisher by William Douglas Home

The Hon. William Douglas Home (3 June 1912 – 28 September 1992) was a British dramatist and Politian. William Douglas-Home wrote some 50 plays, most of them comedies in an upper class setting.
"In the space of a month or two after his release he wrote two plays which were successful in London in 1947. The first, Now Barabbas, was based on his experience in gaol and in the latter some of the characters were drawn from his family."
Although Douglas-Home was a prolific playwright, his works have neither the depth nor the durability of such near contemporaries as Rattigan or Coward. However, his play The Reluctant Debutante (1955) has been adapted twice into film. The first film, called The Reluctant Debutante, released in 1958, featured Rex Harrison and Sandra Dee, with a screenplay by the playwright himself. The second was released in 2003, under the title What a Girl Wants, starring Amanda Bynes, Colin Firth, and Kelly Preston. The remake features a hereditary peer in the House of Lords who disclaims his title to stand for election to the House of Commons. Douglas-Home's brother Alec was one of the first to do so after the Peerage Act 1963.
As part of the 1975 centennial season of the D'Oyly Carte Opera Company, Douglas-Home wrote a curtain raiser called Dramatic Licence, in which Richard D'Oyly Carte, W.S. Gilbert, and Arthur Sullivan plan the birth of Trial by Jury in 1875. Peter Pratt played Carte, Kenneth Sandford played Gilbert, and John Ayldon played Sullivan.
His other plays included: The Chiltern Hundreds (1947), Caro William (1952), The Cigarette Girl (1962), Lloyd George Knew My Father (1972) he Kingfisher.

Size 305 x 200 mm
Great Information on the show and cast a must for any collector.
Condition: Good 8/10 Cover has some small marks bottom of cover
(Please Note scans are low res for fast loading)