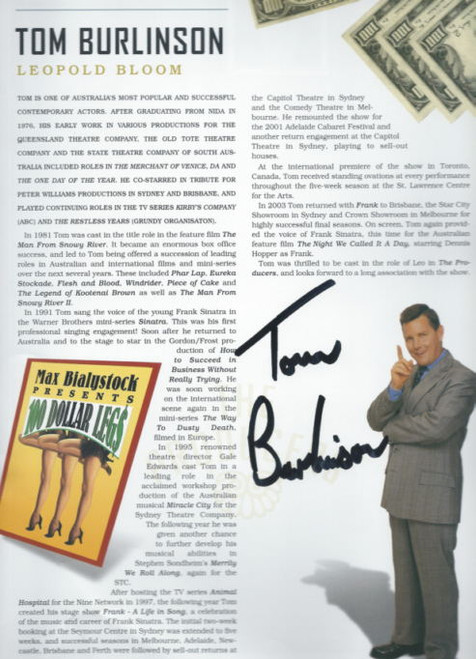 Condition: Used - has been knocked on the front left hand side bottom - shows some creases

The Producers is a 2001 musical play adapted by Mel Brooks and Thomas Meehan from Brooks’ 1968 film of the same name, with lyrics by Brooks and music by Brooks and Glen Kelly. As in the film, the story concerns two theatrical producers who scheme to get rich by overselling interests in a Broadway flop. Complications arise when the show unexpectedly turns out to be successful. The humor of the show is accessible to a wide range of audiences and draws on ridiculous accents, caricatures of homosexuals and Nazis, and many show business in-jokes.

David Geffen persuaded Mel Brooks to turn his movie into a stage musical. When Brooks met with Jerry Herman to discuss their working together, Herman declined, telling Brooks that he should do the job himself, as he was a good songwriter. Brooks then asked Thomas Meehan to join him in writing the book for the stage. Brooks persuaded Mike Ockrent and his wife Susan Stroman to join the creative team as director and choreographer. After Ockrent's death in 1999, Stroman agreed to continue as both director and choreographer

This Souvenir Brochure is from the 2004 Australian Tour. All Items incur a $5.00 handling fee per item (including free shipping)