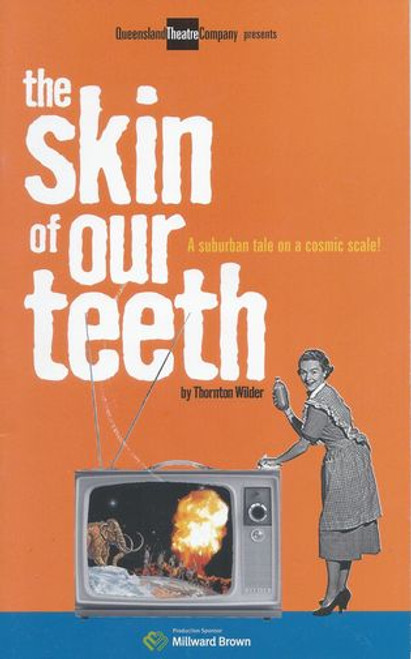 The Skin of Out Teeth - Queensland Theatre Company 2000

The Skin of Our Teeth is a play by Thornton Wilder that won the Pulitzer Prize for Drama. It opened on October 15, 1942, at the Shubert Theatre in New Haven, Connecticut, before moving to the Plymouth Theatre on Broadway on November 18, 1942. It was produced by Michael Myerberg and directed by Elia Kazan. The play is a three-part allegory about the life of mankind, centering on the Antrobus family of the fictional town of Excelsior, New Jersey. The original production starred Tallulah Bankhead, Fredric March, Florence Eldridge, and Montgomery Clift. Bankhead won a Variety Award for Best Actress and the New York Drama Critics Award for Best Actress of the Year for her role as Sabina. When she left the production in March 1943, she was replaced by Miriam Hopkins. Hopkins was in turn replaced by Gladys George. For two performances, while George was ill, Lizabeth Scott, who had been Bankhead's understudy, was called in to play the role. Scott then played the role for the production's run in Boston. Originally billed in New York as "Elizabeth Scott", she dropped the "E" before taking the part in Boston, and it became her breakthrough role. The epic comedy-drama is noted as among the most heterodox of classic American comedies — it broke nearly every established theatrical convention.