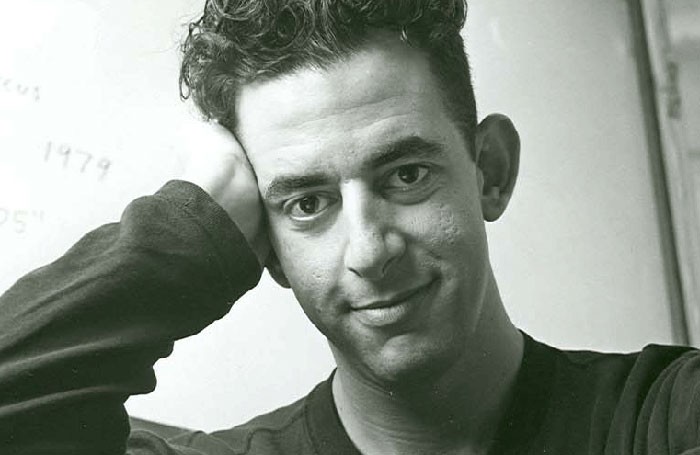 Jonathan David Larson (1960–1996) was an American composer and playwright noted for exploring the social issues of multiculturalism, addiction, and homophobia in his work. Typical examples of his use of these themes are found in his works Rent and Tick, Tick… Boom! He received three posthumous Tony Awards and a posthumous Pulitzer Prize for Drama for the rock musical Rent.

Jonathan Larson was born to Jewish parents, Allan and Nanette Larson, in White Plains, New York, on February 4,[citation needed] 1960.[1] He was exposed to the performing arts, especially music and theatre, from an early age, as he played the trumpet, tuba, sang in his school’s choir, and took formal piano lessons. His early musical influences were his favorite rock musicians such as Elton John, The Beatles, The Doors, The Who, and Billy Joel, as well as the classic composers of musical theatre, especially Stephen Sondheim. Larson was also involved in acting in high school, performing in lead roles in various productions at White Plains High School.[2]

Larson attended Adelphi University in Garden City, New York, with a four-year scholarship as an acting major, in addition to performing in numerous plays and musical theatre. During his college years, he began music composition, composing music first for small student productions, called cabarets, and later the score to a musical entitled Libro de Buen Amor, written by the department head, Jacques Burdick. Burdick functioned as Larson’s mentor during his college education. After graduating with a Bachelor of Fine Arts degree, Larson participated in a summer stock theatre program at The Barn Theatre in Augusta, Michigan as a piano player, which resulted in his earning an Equity Card for membership in the Actors’ Equity Association.

Larson moved to a loft with no heat on the fifth floor of a building at the corner of Greenwich Street and Spring Street in Lower Manhattan where he lived with various roommates, among them Greg Beals, a journalist for Newsweek magazine and the brother of actress Jennifer Beals, and James Clunie, now a creative director at advertising agency BBDO. For 9 and a half years Larson worked as a waiter at the Moondance Diner during weekends, and worked on composing and writing musicals during the weekdays. At the diner Larson later met Jesse L. Martin, who was his waiting trainee and later would perform the role of Tom Collins in the original cast of Larson’s Rent. Larson and his roommates lived in harsh conditions with little money or property.

Larson died unexpectedly the morning of Rent’s first preview performance Off Broadway. He suffered an aortic dissection, believed to have been caused by undiagnosed Marfan syndrome, in the early morning on January 25, 1996.[10][11] New York State medical investigators concluded that if the aortic dissection had been properly diagnosed and treated, Larson would have lived.[12]
He had been suffering severe chest pains, dizziness, and shortness of breath for several days prior to his death, but doctors at Cabrini Medical Center and St. Vincent’s Hospital could not find signs of an aortic aneurysm even after doing a chest X-ray and electrocardiogram so they misdiagnosed it either as flu or stress.[10]

Before composing and writing the musical Rent, his most popular work, Jonathan Larson wrote a variety of early theatrical pieces, with varying degrees of success and production.

Among his early creative works is Sacrimmoralinority, his first musical which was co-written with David Glenn Armstrong, and originally staged at his alma mater Adelphi University in the winter of 1981. Following Jonathan and David’s graduation in 1982, and retitled Saved! – An Immoral Musical on the Moral Majority, the Brechtian-themed musical cabaret played a four-week showcase run at Rusty’s Storefront Blitz, a small theatre on 42nd Street in Manhattan, and won both authors a writing award from ASCAP.

Between 1983 and 1990, Larson wrote Superbia, originally intended as a futuristic rock retelling of George Orwell’s book Nineteen Eighty-Four, though the Orwell estate denied him permission to adapt the novel itself. Superbia won the Richard Rodgers Production Award and the Richard Rodgers Development Grant.[2] However, despite performances at Playwrights Horizons and a rock concert version produced by Larson’s close friend and producer Victoria Leacock at the Village Gate in September 1989, Superbia was not fully produced, leading to disappointment for Larson.

His next work, completed in 1991, was an autobiographical “rock monologue” entitled 30/90, which was later renamed Boho Days and finally titled tick, tick… BOOM!. This piece, written for only Larson with a piano and rock band, was intended to be a response to his feelings of rejection caused by the disappointment of Superbia. The show was performed off-Broadway at the Village Gate in Greenwich Village, as well as at the Second Stage Theater, then on the Upper West Side. Both of these productions were produced by Victoria Leacock. The producer Jeffrey Seller saw a reading of Boho Days and expressed interest in producing Larson’s musicals. After Larson’s death, the work was reworked into a stage musical by playwright David Auburn and arranger and musical director Stephen Oremus. The stage version premiered off-Broadway in 2001, and has since also been produced on the West End.
In 1992, Larson collaborated with fellow composer/lyricists Rusty Magee, Bob Golden, Paul Scott Goodman and Jeremy Roberts on Sacred Cows, which was devised and pitched to television networks as a weekly anthology with each episode taking a different Biblical or mythological story and giving it a ’90s celebrity twist. The project was shelved due to scheduling conflicts among the five composers but resurfaced over 20 years later in a six-page Playbill.com article. The demo for Sacred Cows was released on iTunes.[3]

While in college, Larson came into contact with his strongest musical theatre influence, Stephen Sondheim, to whom he occasionally submitted his work for review. One tick, tick… BOOM! song called “Sunday” is a homage to Sondheim, who supported Larson, staying close to the melody and lyrics of Sondheim’s own song of the same title but turning it from a manifesto about art into a waiter’s lament. Sondheim would often write letters of recommendation for Larson to various producers. Larson later won the Stephen Sondheim Award.

In addition to his three larger theatrical pieces written before Rent, Larson also wrote music for J.P. Morgan Saves the Nation;[4] numerous individual numbers; music for Sesame Street; music for the children’s book cassettes of An American Tail and The Land Before Time; music for Rolling Stone magazine publisher Jann Wenner; a musical called Mowgli; and four songs for the children’s video Away We Go!, which he also conceived with collaborator and composer Bob Golden and directed. He also performed in John Gray’s musical Billy Bishop Goes to War, which starred his close friend actor Roger Bart (Desperate Housewives). For his early works, Larson won a grant and award from the American Society of Composers, Authors, and Publishers and the Gilman and Gonzalez-Falla Theatre Foundation’s Commendation Award.[5]

Playwright Billy Aronson came up with the idea to write a musical update of La Bohème in 1988. He wanted to create “a musical inspired by Giacomo Puccini’s La Bohème, in which the luscious splendor of Puccini’s world would be replaced with the coarseness and noise of modern New York”.[6]

In 1989, Aronson called Ira Weitzman with his idea, asking for ideas for collaborators, and Weitzman put Larson together with Aronson to collaborate on the new project. Larson came up with the title and suggested moving the setting from the Upper West Side to downtown, where Larson and his roommates lived in a rundown apartment.[7] For a while, he and his roommates kept an illegal wood-burning stove because of lack of heat in their building, and he also dated a dancer for four years who sometimes left him for other men and eventually left him for a woman. These experiences would influence the autobiographical aspects of Rent. Larson wanted to write about his own experience, and in 1991, he asked Billy if he could use the original concept they collaborated on and make Rent his own.[6] They made an agreement that if the show went to Broadway, Aronson would share in the proceeds. Eventually they decided on setting the musical not in SoHo, where Larson lived, but rather in Alphabet City in the East Village.

Rent started as a staged reading in 1993 at the New York Theatre Workshop, followed by a studio production that played a three-week run a year later. However, the version that is now known worldwide, the result of a three-year-long collaborative and editing process between Larson and the producers and director, was not publicly performed before Larson’s death. The show premiered Off Broadway on schedule. Larson’s parents (who were flying in for the show anyway) gave their blessing to open the show. Due to Larson’s death the day before the first preview performance, the cast agreed that they would premiere the show by simply singing it through, all the while sitting at three prop tables lined up on stage. But by the time the show got to its high energy “La Vie Boheme”, the cast could no longer contain themselves and did the rest of the show as it was meant to be, minus costumes, to the crowd and the Larson family’s approval. Once the show was over, there was a long applause followed by silence which was eventually broken when an audience member shouted out “Thank you, Jonathan Larson.”

Rent played through its planned engagement to sold-out crowds and was continually extended. The decision was finally made to move the show to Broadway, and it opened at the Nederlander Theatre on April 29, 1996.[8] In addition to the New York Theatre Workshop, Rent was and is produced by Jeffrey Seller, who was introduced to Larson’s work when attending an off-Broadway performance of Boho Days, and two of his producer friends who also wished to support the work, Kevin McCollum and Allan S. Gordon. 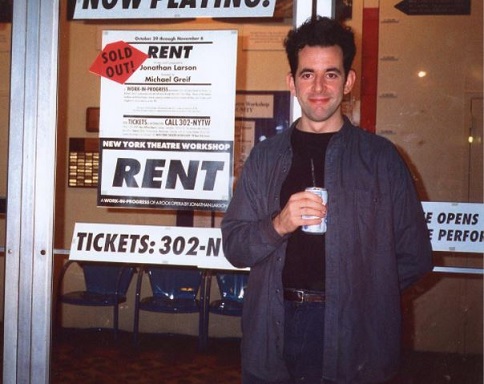 Rent played on Broadway at the Nederlander Theatre from its debut in April 1996 until it closed on September 7, 2008.[13] It is the 11th longest running show in Broadway history.[14] In addition, it has toured throughout the United States, Canada, Japan, United Kingdom, Australia, China, Singapore, Philippines, Mexico, Germany, Poland, and throughout Europe, as well as in other locations. A film version was released in 2005.
After his death, Larson’s family and friends started the Jonathan Larson Performing Arts Foundation to provide monetary grants to artists, especially musical theatre composers and writers, to support their creative work. The Jonathan Larson Grants are now administered by the American Theatre Wing, thanks to an endowment funded by the Foundation and the Larson Family.[15]

Jonathan’s work was given to the Library of Congress in Washington, D.C., in December 2003. The Jonathan Larson Collection is a new addition to its major holdings in the area of musical theater. The collection documents Larson’s surprisingly prolific output, including numerous musicals, revues, cabarets, pop songs, dance and video projects – both produced and unproduced.
Less than three years after Rent closed on Broadway it was revived Off-Broadway at Stage 1 of New World Stages just outside the Theater District. The show was directed by Michael Greif who directed the original productions. The show went into previews on July 14, 2011, and opened August 11, 2011.
Jonathan Larson Grants

In memoriam of Jonathan Larson, in 1996,[16] the Larson family along with the Jonathan Larson Performing Arts Foundation put together an award honoring emerging musical theater writers and composers.[17] In 2008, the American Theatre Wing adopted and continued on the legacy through the Jonathan Larson Grants, an unrestricted cash gift to aid in the creative endeavors of the writers and promote their work.[18]
Previous winners include:[19]