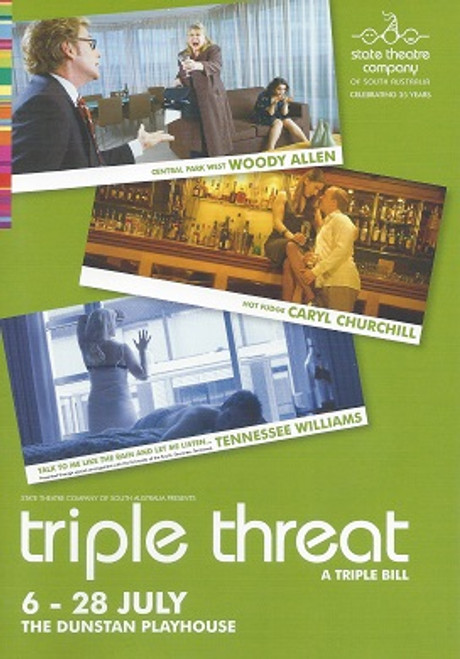 Central Park West by Woody Allen, Hot Fudge by Caryl Churchill, Talk to me Like The Rain and Let Me Listen by Tennessee Williams

Central Park - A well to do psychiatrist has just discovered that her best friend is having an affair with her husband in Woody Allen’s wildly comic play, Central Park West. She has invited the friend over for a confrontation after getting thoroughly soused. Meanwhile, the husband is about to run off with a college student. Central Park West provides an hour of constant hilarity.

Talk To Me - Talk to Me Like the Rain and Let Me Listen was written in 1953 as part of a series of one-acts Williams wrote in particular for community theatre. Unlike the large scenic demands of his larger works (i.e. A Streetcar Named Desire) Talk Like The Rain... features a small-scale, bare-room situation. It involves an unnamed Man and Woman who are bound together in an endless cycle by their hopeless poverty. Major William's themes are explored in the Man's alcoholism and the Woman's desperation. Although not specified, the one-act can be worked in a more surrealist fashion. Monologues for both sexes, with the Woman's being substantially longer, spanning several pages.