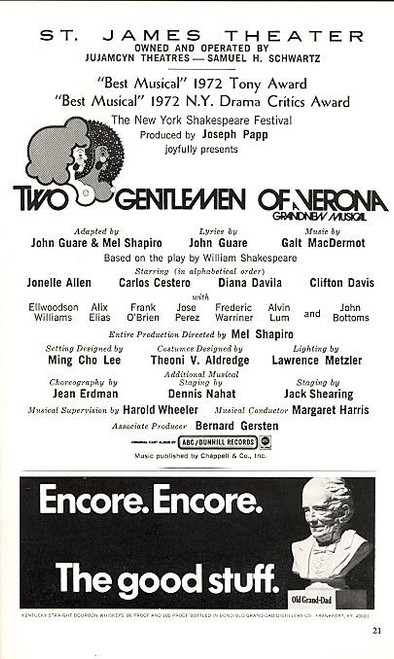 Two Gentlemen of Verona is a rock musical, with a book by John Guare and Mel Shapiro, lyrics by Guare and music by Galt MacDermot, based on the Shakespeare comedy of the same name. The original Broadway production, in 1971, won the Tony Awards for Best Musical and Best Book. A London production followed in 1973. The Public Theatre revived the piece in 2005.

The musical was revived by the Public Theater in their Shakespeare in the Park series for a limited run in 2005 at the Delacorte Theater. Kathleen Marshall directed and choreographed, and the cast featured Norm Lewis (Valentine), Oscar Isaac (Proteus), Rosario Dawson (Julia), Renée Elise Goldsberry (Silvia), Paolo Montalban (Eglamour), Mel Johnson Jr. (Duke of Milan) and John Cariani (Speed). Critic Ben Brantley compared the "festive production" to "a fruity sangría", praising the cast but concluding that the work has not held up well. He wrote that the play's "wayward" characters were "not without parallels among the lotus-eating youth of the post-Woodstock years – a comparison that Messrs. Shapiro, Guare and MacDermot made canny use of. They also scaled down Shakespeare's passages of poetic pain for an approach that emphasized an easygoing, multicultural exuberance over wistful poetry and nonsense over sensibility.... [But] MacDermot's songs... lack the variety of his score for Hair.... And the lyricism Mr. Guare is known for as a playwright is rarely in evidence in his clunky work here as a lyricist.

Two Weeks with the Queen