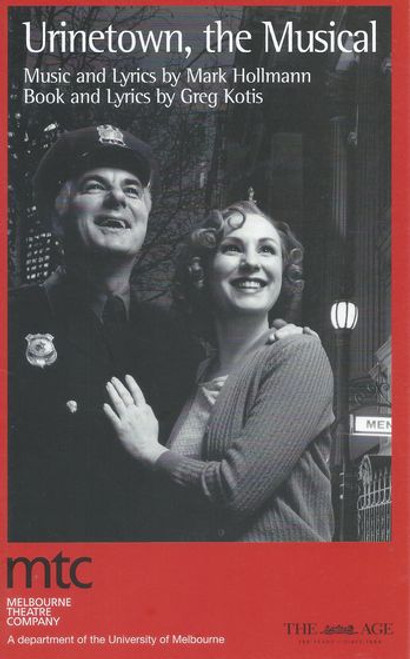 by Mark Hollmann and Greg Kotis

Urinetown: The Musical is a satirical comedy musical that premiered in 2001, with music by Mark Hollmann, lyrics by Hollmann and Greg Kotis, and book by Kotis. It satirizes the legal system, capitalism, social irresponsibility, populism, bureaucracy, corporate mismanagement, and municipal politics. The show also parodies musicals such as The Threepenny Opera, The Cradle Will Rock and Les Misérables, and the Broadway musical itself as a form.

Urinetown debuted at the New York International Fringe Festival, and then was produced Off-Broadway at the American Theatre for Actors, from May 6, 2001 to June 25, 2001. The musical then opened on Broadway at Henry Miller's Theatre, running from September 20, 2001 through January 18, 2004, totaling 25 previews and 965 performances. It was nominated for 10 Tony Awards and won three.