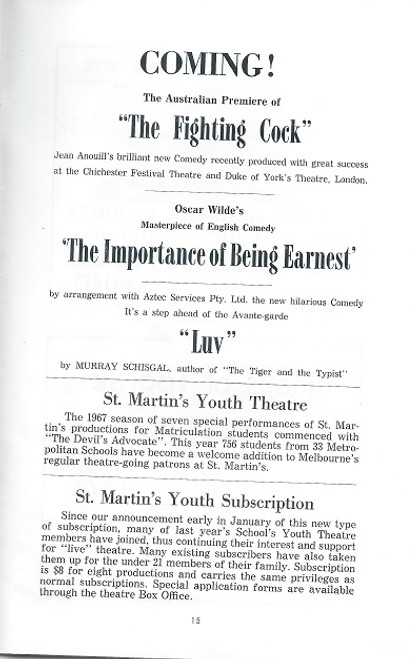 William Motter Inge  May 3, 1913 – June 10, 1973) was an American playwright and novelist, whose works typically feature solitary protagonists encumbered with strained sexual relations. In the early 1950s, he had a string of memorable Broadway productions, including Picnic, which earned him a Pulitzer Prize. With his portraits of small-town life and settings rooted in the American heartland, Inge became known as the "Playwright of the Midwest."

Inge's The Last Pad premiered in Phoenix, Arizona, in 1972. Originally titled The Disposal, the world premiere of The Last Pad was produced by Robert L. "Bob" Johnson and directed by Keith A. Anderson through the Southwest Ensemble Theatre. The production starred Nick Nolte with Jim Matz and Richard Elmore (Elmer). The production moved to Los Angeles and opened just days after Inge died by suicide. The original production in Phoenix was proclaimed the Best Play of 1972 by the Arizona Republic, while the Los Angeles production brought awards to Nolte and helped introduce him to the film industry and catapult his subsequent film career.
The Last Pad is one of three of Inge's plays that either have openly gay characters or address homosexuality directly. The Boy in the Basement, a one-act play written in the early 1950s, but not published until 1962, is his only play that addresses homosexuality overtly, while Archie in The Last Pad and Pinky in Where's Daddy? (1966) are gay characters. Inge himself was closeted.

Whose life is it anyhow