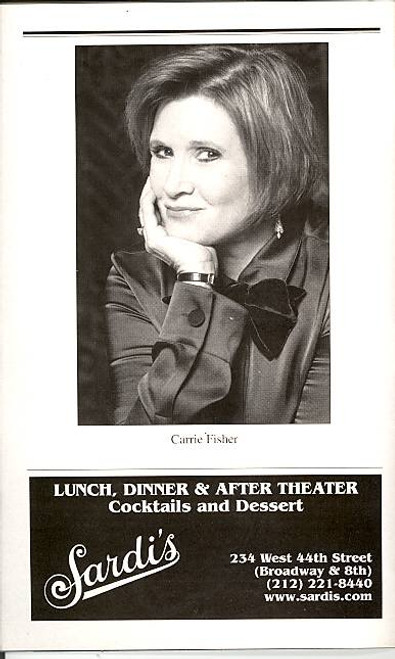 Wishful Drinking is an autobiographical book by actress and author Carrie Fisher that was published in 2008. Wishful Drinking, an in-person memoir of Fisher’s life as Hollywood child and bipolar adult, is a kind of psychological striptease. It’s entertaining and revealing, but never quite enough of either. The book has been turned into a one-woman play in which Fisher has been performing. Developed for Berkeley Repertory Theatre  near San Francisco at the beginning of 2008, the Broadway production opened in a limited run on Broadway at Studio 54 on September 22, 2009 (previews) and October 4, 2009, and closed on January 17, 2010. After its successful San Francisco Bay Area run and before moving to Broadway, Wishful Drinking played at, among other venues, the Arena Stage in Washington, D.C. in September 2008,  and Seattle Repertory Theatre April - May 2009.