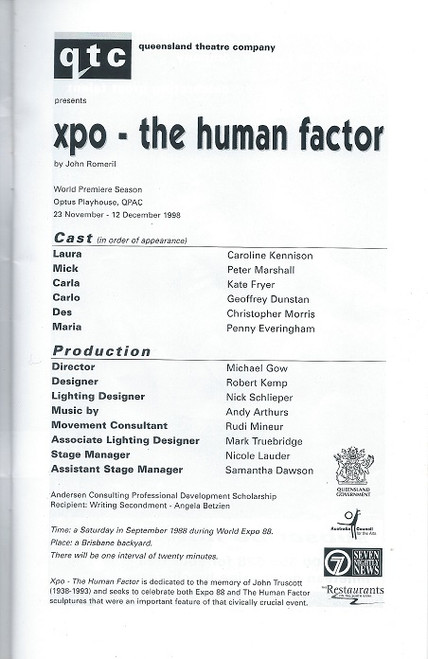 John Henry Romeril AM is a contemporary Australian playwright. John Romeril was born and grew up in Melbourne where he attended Monash University. His first plays, I Don't Know Who To Feel Sorry For and Chicago, Chicago were written while he was still a student. Since then he has written over forty works including Mrs Thally F, The Floating World and The Kelly Dance. He has also written for television and the filmscript One Night the Moon was produced in 2001. His work has won the Canada-Australia Literary Award in 1976, the Victorian Government Drama Fellowship in 1988 and the Asialink Playwrighting Competition in 2004. From 2004 to 2006 he received an Australia Council Creative Fellowship from the Literature Board of the Australia Council and was the recipient of the University of New South Wales' Literary Scholarship in 2006-7. In 2008 he was awarded the Patrick White Award.

John Romeril, who is this 2012 rcipient of the Green Room Lifetime Achievement Award. As one of Australia’s leading and most prolific contemporary writers for theatre, Romeril is recognised for his plays focusing on political and social issues. His work has also been performed internationally and translated into Japanese, Vietnamese and Italian.

Size 240 mm x 150mm
Pictures and information of the cast and show.
Condition: Used Good 8/10
(Please Note scans are low res for fast loading)
Each Order will incur a $5.00 handling fee (including free shipping)
All Prices Shown are in USD (United States of America Dollars)
All Payments by Paypal Just Checkout as GUEST no need to register