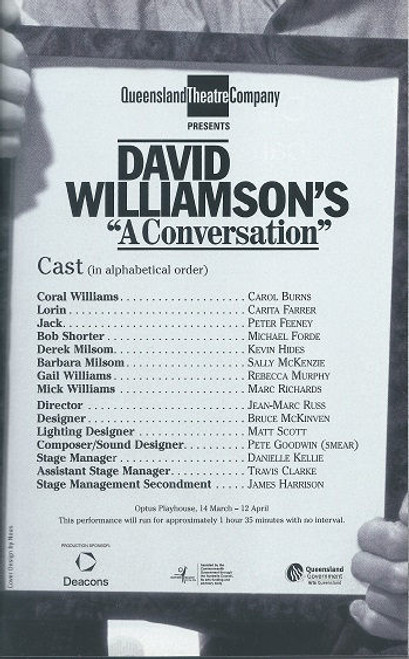 A Conversation by David Williamson

A Conversation is a play by Australian author David Williamson. It was the second in his "Jack Manning trilogy" of plays about conferencing,
In recent years he has alternated work between larger stages (including Soul Mates, Amigos and Influence – all premiered with the Sydney Theatre Company) and smaller ones (including the Manning trilogy, Flatfoot and Operator, which premiered at the Ensemble Theatre).

David Keith Williamson, AO born 24 February 1942 is one of Australia's best-known dramatists and playwrights. He has also written screenplays and teleplays. Williamson first turned to writing and performing in plays in 1967 with La Mama Theatre Company and The Pram Factory, and rose to prominence in the early 1970s, with works such as Don's Party (later turned into a 1976 film), a comic drama set during the 1969 federal election; and The Removalists (1971). He also collaborated on the screenplays for Gallipoli (1981) and The Year of Living Dangerously (1982). Williamson's work as a playwright focuses on themes of politics, loyalty and family in contemporary urban Australia, particularly in two of its major cities, Melbourne and Sydney.