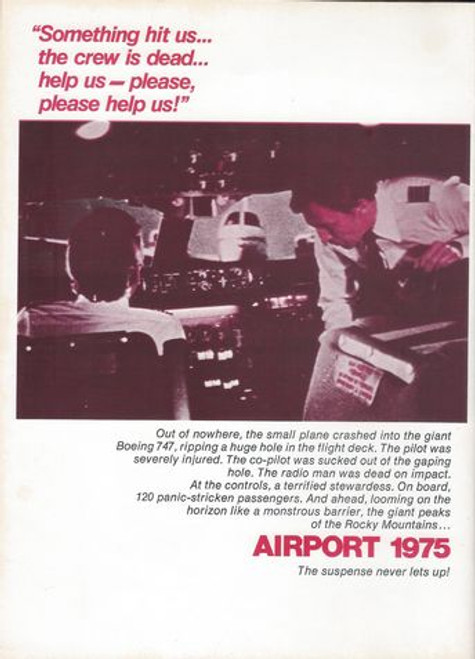 Airport 1975 (also known as Airport '75) is a 1974 American air disaster film and the first sequel to the successful 1970 film Airport. It was directed by Jack Smight, produced by William Frye and Jennings Lang, and written by Don Ingalls.  The film stars Charlton Heston, Karen Black, George Kennedy and Gloria Swanson in her final film role. The plot concerns the dramatic events aboard an airborne Boeing 747 when a small aircraft crashes into the cockpit causing the fatalities of senior crew and the blinding of the pilot with no one aboard qualified to take the controls.  Airport 1975 was the seventh highest-grossing movie of 1974 at the US and Canada box office.

Airport 1975 used a Boeing 747-123 (s/n 20390. Registration N9675), rented from American Airlines when it was temporarily taken out of passenger service at the start of American's restructuring away from the fleet of Boeing jumbo jets in mid-1974. The aircraft was leased to Trans Mediterranean Airways briefly in 1976, before returning and being converted into an "American Freighter" variant. In 1984, the aircraft was sold to UPS, where it continued to serve as a freighter for over 20 years before being retired to desert storage in 2005 (and scrapped in 2011).

Condition: Used Good - Some discolor on Spine - The Program is printed on Newspaper type of Paper

All associated graphics, logos, trader marks, trade names or copyrights are the property of the original owner and are used here for factual and educational purposes only.

If there are any errors please contact us with corrections mail@www.theatregold-memorabilia.com