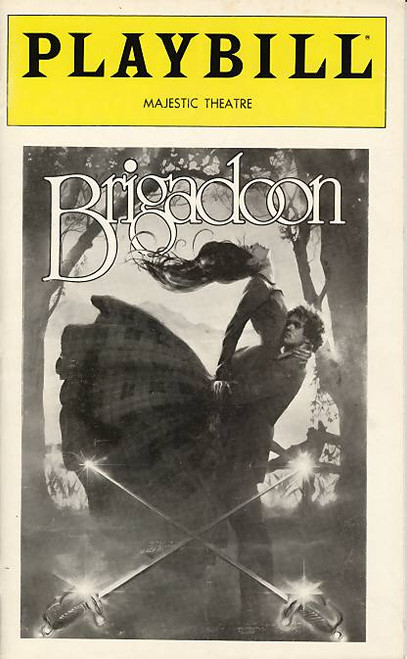 Brigadoon is a musical with a book and lyrics by Alan Jay Lerner and music by Frederick Loewe. Songs from the musical, such as "Almost Like Being in Love" have become standards. It tells the story of a mysterious Scottish village that appears for only one day every hundred years, though to the villagers, the passing of each century seems no longer than one night. The enchantment is viewed by them as a blessing rather than a curse, for it saved the village from destruction. According to their covenant with God, no one from Brigadoon may ever leave, or the enchantment will be broken and the site and all its inhabitants will disappear into the mist forever. Two American tourists, lost in the Scottish Highlands, stumble upon the village just as a wedding is about to be celebrated, and their arrival has serious implications for the village's inhabitants. The original production opened on Broadway in 1947 and ran for 581 performances. Brigadoon then received a West End production opening in 1949 that ran for 685 performances, and many revivals followed. A 1954 film version starred Gene Kelly and Cyd Charisse. A 1966 television version starred Robert Goulet and Peter Falk. Brigadoon (Jan 1981) Martin Vidnovic, Meg Bussert, Frank Hamilton, Jeffery Fahey-Majestic Theatre.