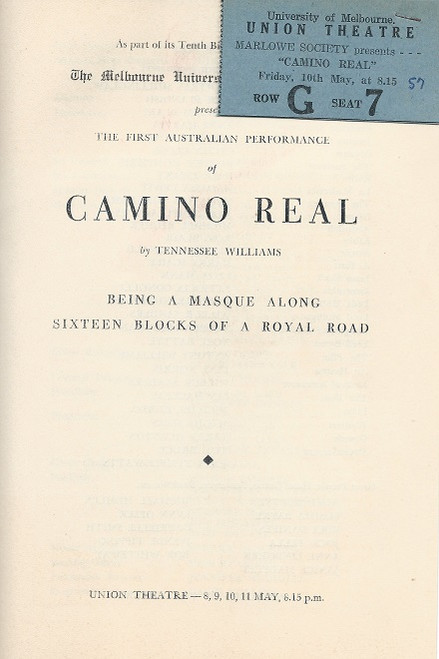 Camino Real is a 1953 play by Tennessee Williams. In the introduction to the Penguin edition of the play, Williams directs the reader to use the Anglicized pronunciation "Cá-mino Réal." The play takes its title from its setting, alluded to El Camino Real, a dead-end place in a Spanish-speaking town surrounded by desert with sporadic transportation to the outside world. It is described by Williams as "nothing more nor less than my conception of the time and the world I live in."
Kilroy, a young American visitor, fulfills some of the functions of the play's narrator, as does Gutman, (named after Sydney Greenstreet's character from The Maltese Falcon, but bearing more resemblance to Signor Ferrari, Greenstreet's character in Casablanca) manager of the hotel Siete Mares, whose terrace occupies part of the stage. Williams also employs a large cast of characters including many famous literary characters who appear in dream sequences. They include Don Quixote and his partner Sancho, Marguerite "Camille" Gautier (see The Lady of the Camellias), Casanova, Lord Byron, and Esmeralda (see The Hunchback of Notre Dame), among others.
Taking place in the main plaza, the play goes through a series of confusing and almost logic-defying events, including the revival of the Gypsy's daughter (Esmeralda)'s virginity and then the loss of it again. A main theme that the play deals with is coming to terms with the thought of growing older and possibly becoming irrelevant.

Size 225 x 155 mm  information of the cast and show.
Condition: Used Good 8/10 little bit of rust on center staples - original ticket stapled on 2nd page
(Please Note scans are low res for fast loading)
Each Order will incur a $5.00 handling fee (including free shipping)
All Prices Shown are in USD (United States of America Dollars)
All Payments by Paypal Just Checkout as GUEST no need to register