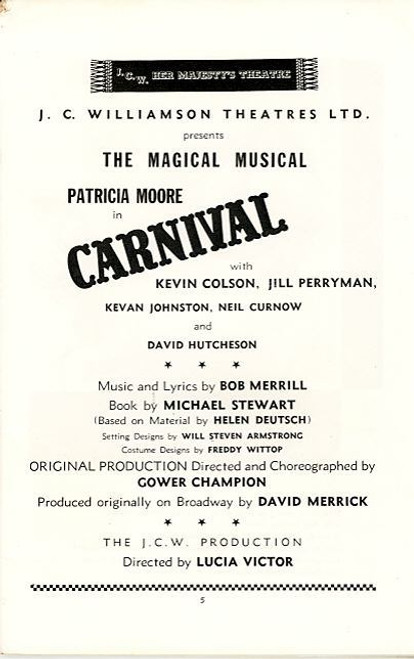 Carnival is a 1961 musical with the book by Michael Stewart and music and lyrics by Bob Merrill. The musical is based on the 1953 film Lili.In December 1958 producer David Merrick announced his intent to produce a stage musical based on the 1953 film Lili, a concept suggested to Merrick by that film's screenwriter Helen Deutsch. Originally Deutsch was to write the musical's book while the score was assigned to Gérard Calvi a French composer - Lili was set in France - who authored the revue La Plume de Ma Tante which Merrick produced on Broadway. Calvi's lack of expertise with English lyrics would result in his dropping out of the Lili musical project whereupon on Deutsch's recommendation Merrick hired Bob Merrill to write the score. Season run at Her Majesty's Theatre Melboune Australia.

Condition 7/10 Showing age, some writing on the cover(small)

ach Order will incur a $5.00 handling fee (including free shipping)
All Prices Shown are in USD (United States of America Dollars)
All Payments by Paypal Just Checkout as GUEST no need to register