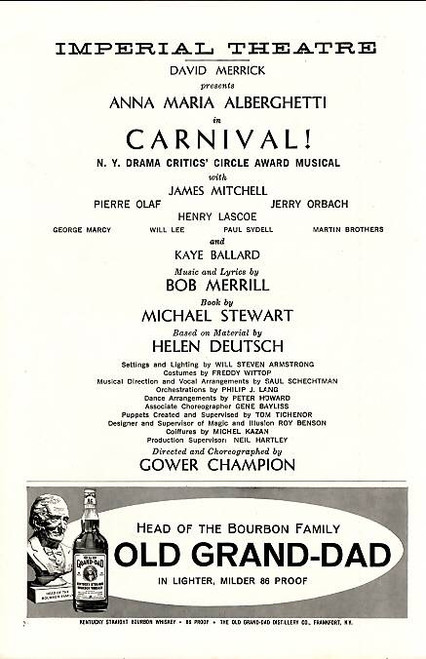 Carnival is a 1961 musical with the book by Michael Stewart and music and lyrics by Bob Merrill. The musical is based on the 1953 film Lili.In December 1958 producer David Merrick announced his intent to produce a stage musical based on the 1953 film Lili, a concept suggested to Merrick by that film's screenwriter Helen Deutsch. Originally Deutsch was to write the musical's book while the score was assigned to Gérard Calvi a French composer - Lili was set in France - who authored the revue La Plume de Ma Tante which Merrick produced on Broadway. Calvi's lack of expertise with English lyrics would result in his dropping out of the Lili musical project whereupon on Deutsch's recommendation Merrick hired Bob Merrill to write the score. Carnival ! (Jul 1961) Anna Maria Alberghetti, James Mitchell, Pierre Olaf, Jerry Orbach - Imperial Theatre