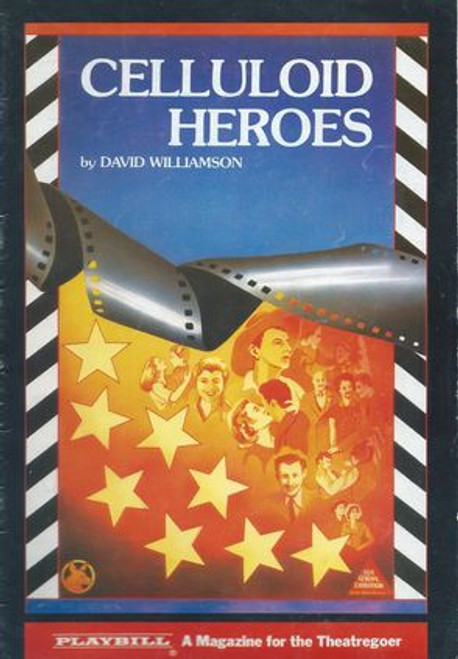 Celluloid Heroes is a play by David Williamson about the Australian film industry. It was written to celebrate the tenth anniversary of the Nimrod Theatre and is not one of his highly regarded plays.David Williamson's first full-length play, The Coming of Stork, premiered at the La Mama Theatre, Carlton, in 1970 and later became the film Stork, directed by Tim Burstall.

The Removalists and Don's Party followed in 1971, then Jugglers Three (1972), What If You Died Tomorrow? (1973), The Department (1975), A Handful of Friends (1976), The Club (1977) and Travelling North (1979). In 1972 The Removalists won the Australian Writers' Guild AWGIE Award for best stage play and the best script in any medium. The British production saw Williamson nominated most promising playwright by the London Evening Standard and the play was a co-winner of the coveted George Devine Award, the first time it had been given to a non UK writer.

The 1980s saw his success continue with Celluloid Heroes (1980), The Perfectionist (1982), Sons of Cain (1985), Emerald City (1987) and Top Silk (1989); whilst the 1990s produced Siren (1990), Money and Friends (1991), Brilliant Lies (1993), Sanctuary (1994), Dead White Males (1995), Heretic (1996), Third World Blues (an adaptation of Jugglers Three) and After the Ball (both in 1997), and Corporate Vibes and Face to Face (both in 1999). The Great Man (2000), Up for Grabs, A Conversation, Charitable Intent (2001), Soulmates (2002), Birthrights (2003), Amigos (2004), Operator (2005) Influence (2006), Scarlett O’Hara at the Crimson Parrot, (2008), Let the Sunshine (2009), Rhinestone Rex and Miss Monica (2010), Don Parties On, (2011), At Any Cost (Co written with Mohamed Kahdra, 2011) and Nothing Personal (2011), When Dad Married Fury (2012) and Managing Carmen (2012), and TRS theatre company produced a critically acclaimed revival of The Removalists. In 2013 The Melbourne Theatre Company produced Rupert, about our most famous media proprietor, and this highly successful production travelled to the Kennedy Centre in Washington. In the same year the Ensemble Theatre in Sydney produced Happiness. In 2014 the Sydney Theatre Company staged a successful revival of Travelling North, starring Bryan Brown, and the Ensemble produced Cruise Control, one of its most successful productions ever, directed by the playwright himself, and revived all three of the Jack Manning Trilogy, and the Griffin Theatre Company staged a revival of Emerald City.

This programme contains a list of Nimrod Theatre productions 1970 -1980.

Condition: Used Good 7/10 some small cracks in the spine