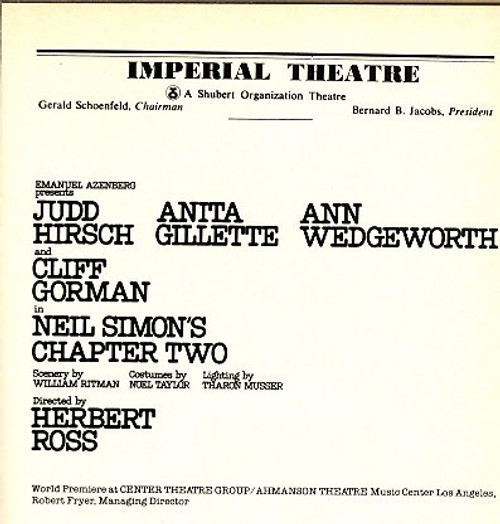 Chapter Two is a semi-autobiographical play by Neil Simon. The plot focuses on George Schneider, a recently widowed writer who is introduced to soap opera actress Jennie Malone by his press agent brother Leo and her best friend Faye. Jennie's unhappy marriage to a football player has dissolved after six years, and she's uncertain if she's ready to start dating yet. Neither is George, whose memories of his first wife threaten to interfere with any effort to embrace a new romance. Produced by Emanuel Azenberg and directed by Herbert Ross, the play had its world premiere at the Ahmanson Theatre in Los Angeles on October 7, 1977 with Judd Hirsch as George, Anita Gillette as Jennie, Cliff Gorman as Leo, and Ann Wedgeworth as Faye. It ran through November 26 [1] and then transferred to the Imperial Theatre on Broadway, where it opened on December 4 after seven previews. In January 1979 it moved to the Eugene O'Neill Theatre to complete its total run of 857 performances. Cast replacements included David Groh, Dick Latessa, Laurence Luckinbill, Robin Strasser, and Susan Browning. The play was nominated for the 1978 Tony Award for Best Play but lost to Da by Hugh Leonard. Simon adapted the play for a 1979 film directed by Robert Moore and starring James Caan and Simon's then-wife Marsha Mason, on whom the character of Jennie was based. A 1996 West End production starred Tom Conti and Sharon Gless, who later recorded a two-disc audiobook of the play with David Dukes for LA TheatreWorks. A portion of the play and the 1979 movie was used for the plot of the American sitcom Seinfeld's third season's episode, The Letter. Chapter Two by Neil Simon (May 1978) Judd Hirsch, Anita Gillette, Ann Wedgeworth, Cliff Gorman - Imperial Theatre.