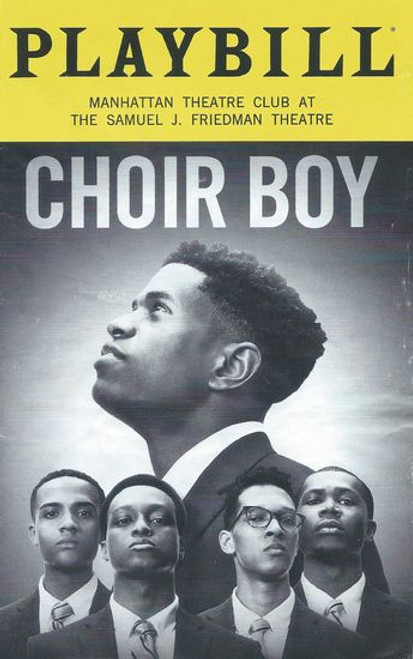 Choir Boy is a play by American playwright Tarell Alvin McCraney. The play premiered in September 2012 at the Royal Court Theatre, London, before going on to play productions at New York City Center, Alliance Theatre, Geffen Playhouse, and many more regional theatres across the United States. The show opened on Broadway at the Samuel J. Friedman Theatre on January 8, 2019, after entering previews on December 12, 2018. Choir Boy was commissioned by Manhattan Theater Club. The production began previews on June 18, 2013, with an official opening on July 2, 2013.The production starred Jeremy Pope as Pharus Jonathan Young, Nicholas L. Ashe as Junior Davis, Kyle Beltran as David Heard, Grantham Coleman as Anthony Justin 'AJ' James, Chuck Cooper as Headmaster Marrow, Austin Pendleton as Mr. Pendleton, and Wallace Smith as Bobby Marrow. The show closed on August 11, 2013