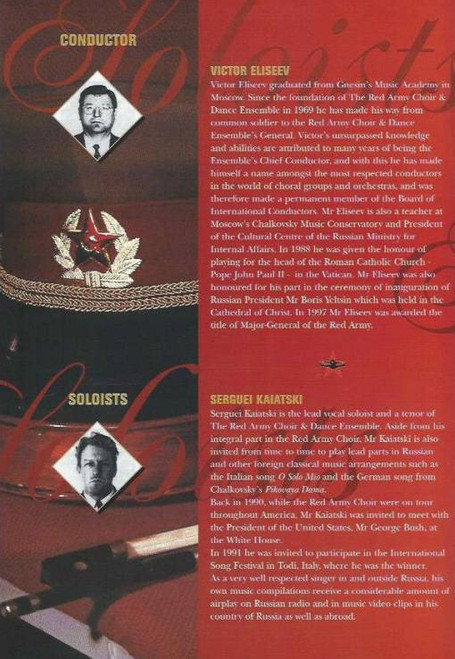 The Red Army Choir MVD Ensemble is an Official Academic Ensemble of the Ministry of the Interior of the Russian Federation. The ensemble carries on the tradition of choirs and ballets of the Soviet Red Army, with singers, musicians and dancers. MVD Ensemble and Alexandrov Ensemble are the only groups with the right to claim the title "Red Army Choir".

The Red Army Choir was born to serve and sustain the Soviet state. Its task was to lift the morale of the exhausted troops, and it did so by glorifying the revolutionary ideal, allowing people to re-live the spirit of the October Revolution and the storming of the Winter Palace. The Alexandrov Ensemble, under the patronage of the Ministry of Defence, was founded in 1929, and The MVD Ensemble under that of the Ministry of Internal Affairs in 1939.

Ensemble MVD has been established in 1939 under the direction of Alexander Vassilivitch. General Victor Eliseev became director of MVD Ensemble in 1985. The Ensemble's repertoire is composed of traditional Russian music, sacred music, opera arias and popular music, such as Katyusha, Kalinka, Kernina, Ave Maria. Since the 1980s, The Red Army Choir MVD has performed on all continents after modernizing their repertoire. Ensemble MVD has realized more than seven thousand performances in several languages, and more than 20 million viewers worldwide.

In this way, Ensemble MVD met the Pope John Paul II in Rome, or opening Summer Olympics 1980 in Moscow. It is the only military body having received the "Star Platinum", on the avenue dedicated to great Russian artists, and it counts fifty of his artists have received the supreme title of "Emeritus Artist of Russia". In 2014, the Red Army Choir MVD open the Winter Olympic Game in Sochi.