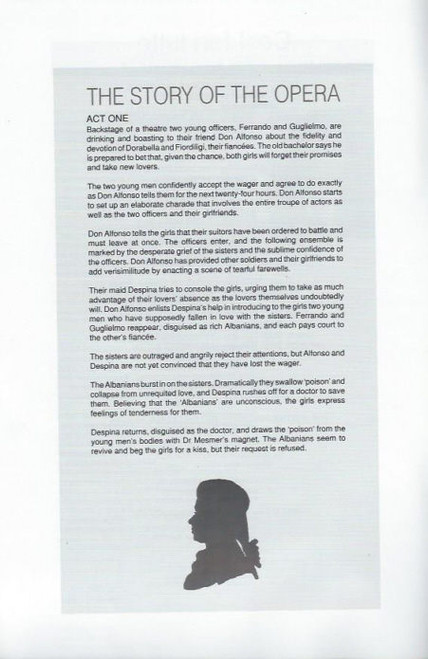 Così fan tutte, ossia La scuola degli amanti (Thus Do They All, or The School for Lovers) K. 588, is an Italian-language opera buffa in two acts by Wolfgang Amadeus Mozart first performed in 1790. The libretto was written by Lorenzo Da Ponte, who also wrote Le nozze di Figaro and Don Giovanni.

Although it is commonly held that Così fan tutte was written and composed at the suggestion of the Emperor Joseph II, recent research does not support this idea. There is evidence that Mozart's contemporary Antonio Salieri tried to set the libretto but left it unfinished. In 1994, John Rice uncovered two terzetti by Salieri in the Austrian National Library.

The first performance of Mozart's setting took place at the Burgtheater in Vienna on January 26, 1790. It was given only five times before the run was stopped by the death of the Emperor Joseph II and the resulting period of court mourning. It was performed twice in June 1790, with the composer conducting the second performance, and again in July (twice) and August (once). After that it was not played in Vienna during Mozart's lifetime. The first British performance was in May 1811, at the King's Theatre, London. Così fan tutte was not performed in the U.S. until 1922, when it was given at the Metropolitan Opera