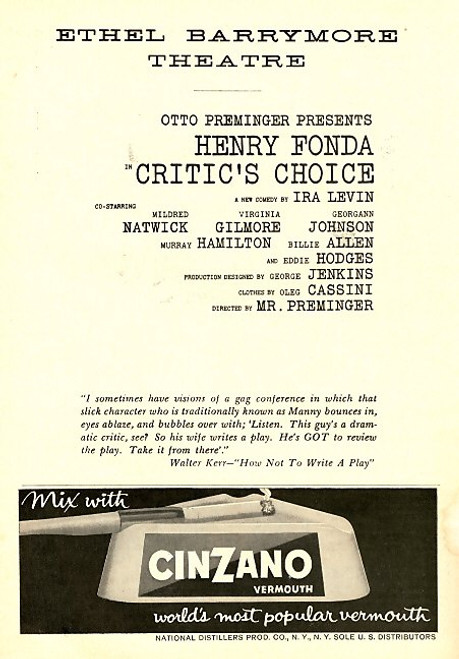 It opened at the Ethel Barrymore Theatre on December 14, 1960 and ran for 189 performances, closing on May 27, 1961. Levin's inspiration was then-New York Herald Tribune drama critic Walter Kerr and his playwright wife Jean. Otto Preminger directed. Oleg Cassini provided the costumes. A play in three acts, Critic's Choice tells the story of theater critic Parker Ballantine whose second wife, Angela, writes a play which is produced on Broadway. The play is awful and Parker must decide whether or not to review the play honestly. Reviewing for The New York Times, Howard Taubman wrote, "Ira Levin's new comedy, which opened at the Ethel Barrymore last night, is not much of a play." And, "Otto Preminger's staging discloses a seasoned hand, although his pacing often turns languid and his ideas for comedy run thin, like the playwright's." In 1963, the play was made into a film of the same name starring Bob Hope and Lucille Ball. Critic's Choice (May 1961) Henry Fonda, Mildred Natwick, Virginia Gilmore, Georgann Johnson - Ethel Barrymore Theatre.