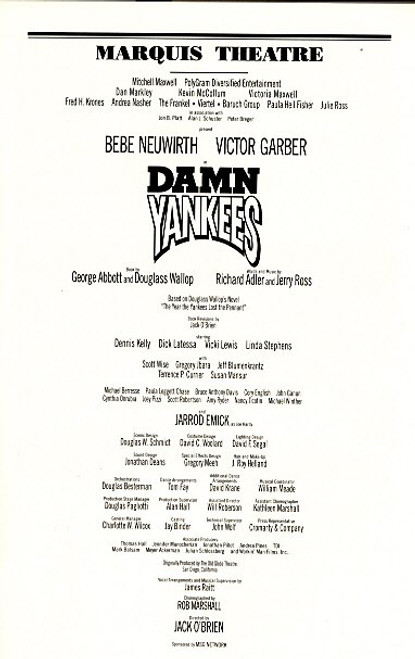 Damn Yankees is a musical comedy with a book by George Abbott and Douglass Wallop and music and lyrics by Richard Adler and Jerry Ross. The story is a modern retelling of the Faust legend set during the 1950s in Washington, D.C., during a time when the New York Yankees dominated Major League Baseball. The musical is based on Wallop's novel The Year the Yankees Lost the Pennant. Damn Yankees ran for 1,019 performances in its original 1955 Broadway production. Adler and Ross's success with The Pajama Game and Damn Yankees seemed to point to a bright future for them, but Ross suddenly died of chronic bronchiectasis, at the age of twenty-nine, a few months after Damn Yankees opened. In the mid-1970s, Vincent Price starred as Applegate in summer stock productions of the show. In the late 1970s and early 1980s film actor Van Johnson appeared as Mr. Applegate in productions throughout the U.S.A. A Broadway revival opened at the Marquis Theatre on March 3, 1994 and ran for 718 performincas and 18 previews. Featured were Bebe Neuwirth as Lola and Victor Garber as Mr. Applegate. Garber was succeeded by Jerry Lewis, making his Broadway debut, on March 12, 1995, who then starred in a national tour and also played the role in a London production. Jack O'Brien directed, with choreography by Rob Marshall, assisted by his sister, Kathleen Marshall. O'Brien is also credited with revisions to the book. Damn Yankees (Mar 1994) Bebe Neuwirth, Victor Garber, Dennis Kelly, Gregory Jbara - Marquis Theatre.