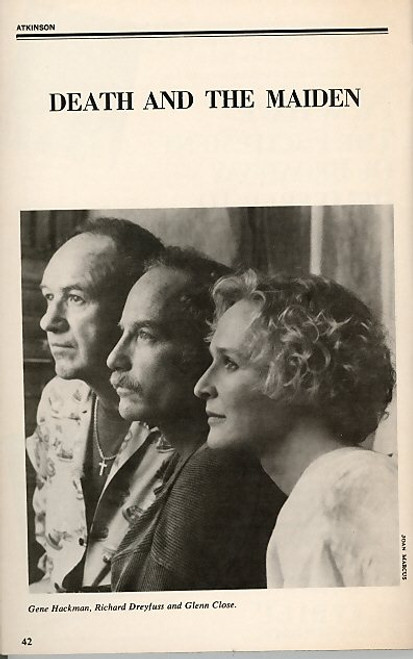 Death and the Maiden is a 1990 play by Chilean playwright Ariel Dorfman. The world premiere was staged at the Royal Court Theatre in London on 9 July 1991, directed by Lindsay Posner. It had one reading and one workshop production prior to its world premiere. Paulina Salas is a former political prisoner in an unnamed Latin American country who had been raped by her captors, led by a sadistic doctor whose face she never saw. The rapist doctor played Schubert's composition Death and the Maiden during the act of rape; hence the play's title. Years later, after the (also unnamed) repressive regime has fallen, Paulina lives in an isolated country house with her husband, Gerardo Escobar. When Gerardo comes back from a visit to the president, he gets a flat tire. A stranger named Dr. Miranda stops to assist him. Dr. Miranda drives Gerardo home and later in the night he returns. Paulina recognizes Miranda's voice and mannerism as that of her rapist, and takes him captive in order to put him on trial and extract a confession from him. Unconvinced of his guilt, Gerardo acts as Roberto Miranda's lawyer and attempts to save his life. After hearing the full story of her captivity from Paulina, Gerardo formulates a confession with Roberto to appease Paulina's madness and set her free from her past. Paulina records the entire confession and has Roberto write it out and sign it. She sends Gerardo out to get Roberto's car so he can go home. While they are alone for the last time, Paulina accuses Roberto of being unrepentant and guilty beyond a reasonable doubt. Throughout the play it is uncertain whether details are evidence of Roberto's guilt or Paulina's paranoia. At the end of the play it is unclear who is innocent.

And the Big Men Fly