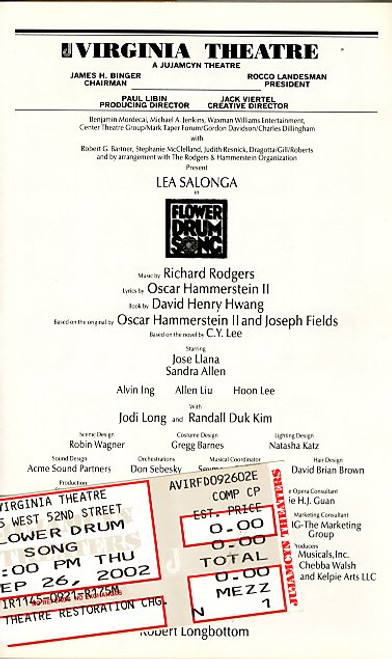 [Flower Drum Song was the eighth stage musical by the team of Richard Rodgers and Oscar Hammerstein II. It was based on the 1957 novel, The Flower Drum Song, by Chinese-American author C. Y. Lee. The piece opened in 1958 on Broadway and was afterwards presented in the West End and on tour. It was subsequently made into a 1961 musical film. After their extraordinary early successes, beginning with Oklahoma! in 1943, Rodgers and Hammerstein had written two musicals in the 1950s that did not do well and sought a new hit to revive their fortunes. Lee's novel focuses on a father, Wang Chi-yang, a wealthy refugee from China, who clings to traditional values in San Francisco's Chinatown. Rodgers and Hammerstein shifted the focus of the musical to his son, Wang Ta, who is torn between his Chinese roots and assimilation into American culture. The team hired Gene Kelly to make his debut as a stage director with the musical and scoured the country for a suitable Asian – or at least, plausibly Asian-looking – cast. The musical, much more light-hearted than Lee's novel, was profitable on Broadway and was followed by a national tour.