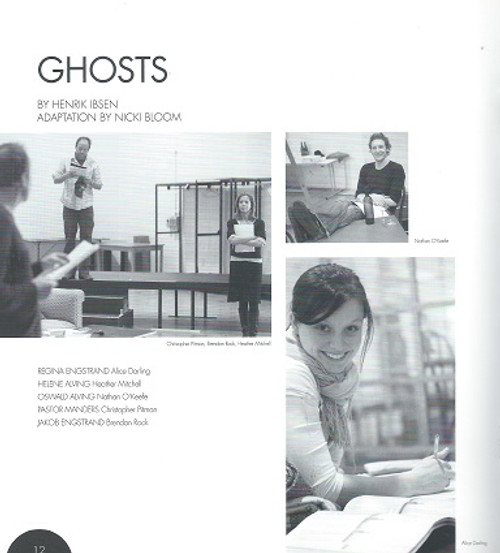 Helene Alving is about to open an orphanage built in memory of her dead husband, Captain Alving, who had been highly respected in the community.

She reveals to her spiritual adviser and former lover, Pastor Manders, that she has hidden the evils of her marriage. Manders had previously advised her to return to her husband despite his philandering, and she followed his advice in the belief that her love for her husband would eventually reform him. However her husband's philandering continued until his death, and Mrs Alving was unable to leave him prior for fear of being shunned by the community.

She discovers that her son Oswald, who had been sent away so that he would not be corrupted by his father) is suffering from congenital syphilis, and (worse) has fallen in love with Regina Engstrand, Mrs. Alving's maid, who is the illegitimate daughter of Captain Alving, and thereby Oswald's own half-sister. Mrs Alvin's worst fear, that her son might have inherited some of his father's characteristics, is realised. The play concludes with Mrs. Alving having to decide whether or not to follow Oswald's wish to be euthanised.