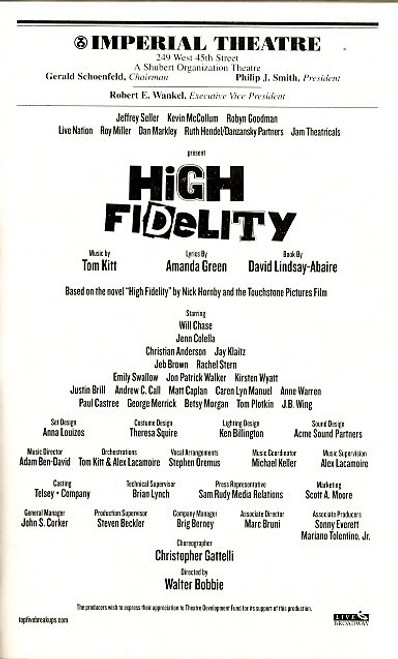 High Fidelity is a musical with a book by David Lindsay-Abaire, lyrics by Amanda Green, and music by Tom Kitt. Based primarily on the Nick Hornby novel rather than the subsequent film version it inspired, the plot focuses on Rob Gordon, a Brooklyn record shop owner in his thirties obsessed with making top five lists for everything, always observing rather than participating in life. When his girlfriend Laura leaves him, he goes through a painful re-evaluation of his life and lost loves (with a little help from his music) and he slowly learns that he has to grow up and let go of his self-centered view of the world before he can find real happiness.Kitt, a graduate of Columbia University, recognized the material's potential for musical adaptation when he first read the book, long before the film was released and became a cult hit. He approached Green (daughter of famed lyricist Adolph), with whom he had attended the BMI Lehman Engel Musical Theater Workshop, with the idea, and she too saw the possibilities. Their score runs the gamut from pop music to rhythm and blues to romantic ballads, with each song in the style and musical vocabulary of a different pop or rock artist, including Bruce Springsteen, Beastie Boys, Indigo Girls, Talking Heads, Aretha Franklin, The Who, Guns N' Roses, Billy Joel, George Harrison, Percy Sledge, and others. Will Chase, Jenn Colella, Christian Anderson, Jay Klaitz, Jeb Brown, Rachel Stern.