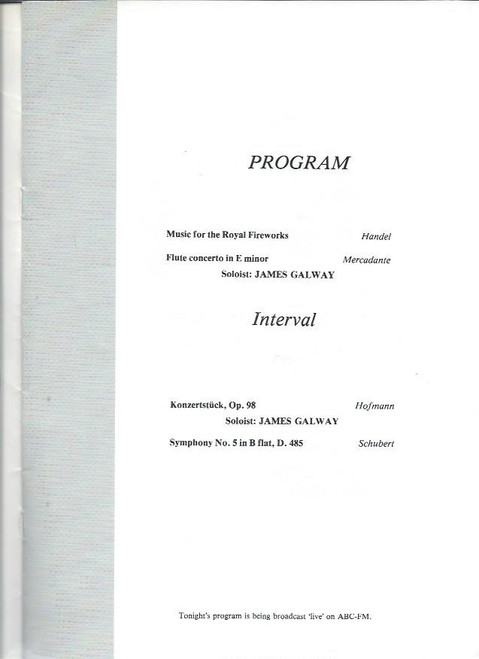 and each piece of the program- Australian Theatre

Sir James Galway OBE (born 8 December 1939) is a virtuoso flute player from Belfast, Northern Ireland, nicknamed "The Man With the Golden Flute". Following in the footsteps of Jean-Pierre Rampal, he became one of the first flute players to establish an international career as a soloist.

After his education time he spent fifteen years as an orchestral player. Galway played with the Philharmonia Orchestra as it rose to prominence in the 1950s.

He then played with Sadler's Wells Opera, Covent Garden Opera, the London Symphony Orchestra and the Royal Philharmonic Orchestra. He auditioned for the Berlin Philharmonic Orchestra under Herbert von Karajan, and was principal flute of that orchestra from 1969 to 1975. To Karajan's surprise and dismay, after a period of some disagreement, Galway decided that he would leave to pursue a solo career.

In addition to his performances of the standard classical repertoire, he features contemporary music in his programmes, including new flute works commissioned by and for him by composers including David Amram, Malcolm Arnold, William Bolcom, John Corigliano, John Wolf Brennan, Dave Heath, Lowell Liebermann and Joaquín Rodrigo. The album James Galway and The Chieftains in Ireland by Galway and The Chieftains" reached number 32 in the UK Albums Chart in 1987.

In 1990, he was invited by Roger Waters to play at The Wall – Live in Berlin concert, held in Potsdamer Platz; he played Pink Floyd's songs "Goodbye Blue Sky" and "Is There Anybody Out There?".

This Program is from his Melbourne Australia Tour 1986