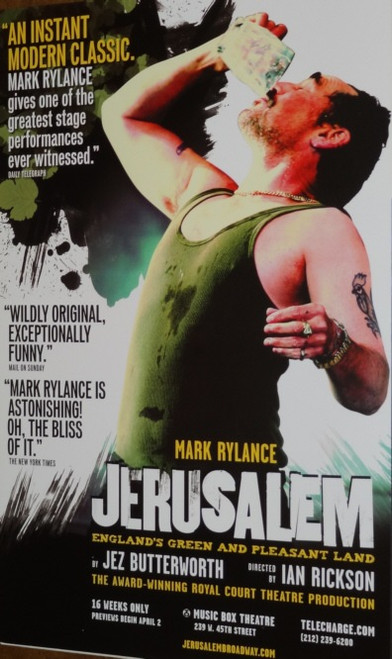 Jerusalem is a play by Jez Butterworth that opened at the downstairs theatre of the Royal Court Theatre in London in 2009. The production starred Mark Rylance as Johnny 'Rooster' Byron and Mackenzie Crook as Ginger. After receiving rave reviews its run was extended. In January 2010 it transferred to the Apollo Theatre.

Jerusalem opened on Broadway on 21 April 2011 at the Music Box Theatre, following previews from 2 April 2011. It was scheduled to play a limited season until 24 July 2011, and then got a four-week extension (to 21 August). Mark Rylance reprises the role of Rooster, with Mackenzie Crook and most of the original Royal Court cast also transferring. The full cast for the production was announced on 17 February 2011, with John Gallagher, Jr., Max Baker, Geraldine Hughes and Richard Short joining the show. The play received a Tony Award nomination as "best play", but lost to War Horse (although Rylance won the Best Actor award).