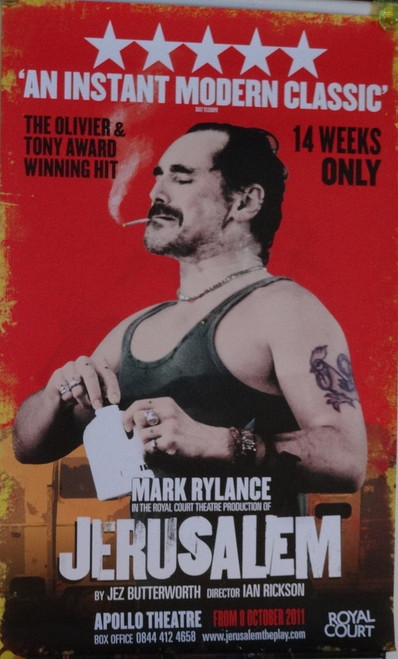 Is a play by Jez Butterworth

Jerusalem is a play by Jez Butterworth that opened in the Jerwood Theatre of the Royal Court Theatre in London in 2009. The production starred Mark Rylance as Johnny "Rooster" Byron and Mackenzie Crook as Ginger. After receiving rave reviews, its run was extended. In January 2010 it transferred to the Apollo Theatre; it played on Broadway in the summer of 2011.

Following a successful run at London's 380-seat Royal Court theatre, Jerusalem transferred to London's West End at the 796-seat Apollo Theatre for a limited 12-week season from 28 January 2010, closing on 24 April 2010. There it received its first negative review. Tim Walker in the Sunday Telegraph wrote of the character of Rooster: "With his chest out and his head back, lined up in a vertical line with his bottom, the actor does indeed resemble a rooster. The problem with the term 'local personality,' however, is that it is all too often a polite euphemism for a crushing bore, and three hours in Rooster's company does prove to be something of an endurance test." Rylance won the Laurence Olivier Award for Best Actor for his performance.