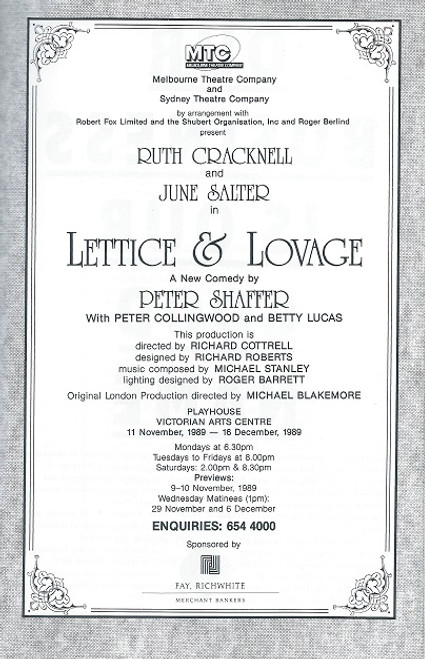 Lettice and Lovage  is a comedic play by Peter Shaffer, author of Equus and Amadeus. The play was written specifically for Dame Maggie Smith, who originated the title role of Lettice Douffet in both the English and American runs of the production. The role of Lotte Schoen was played by Margaret Tyzack.

The play was originally produced in London in 1987. Its two-year run of 768 performances at the Gielgud Theatre counts as one of the longer runs in London theatrical history. The play was revised by Shaffer in 1988, and it was that revised version that later ran in New York.

Lettice and Lovage's first American production opened with a preview performance in New York, New York at the Ethel Barrymore Theatre on March 13, 1990. It ran from March 25, 1990 to December 23, 1990 with a total of 286 performances

This Souvenir Program is from the 2000 Melbourne Production