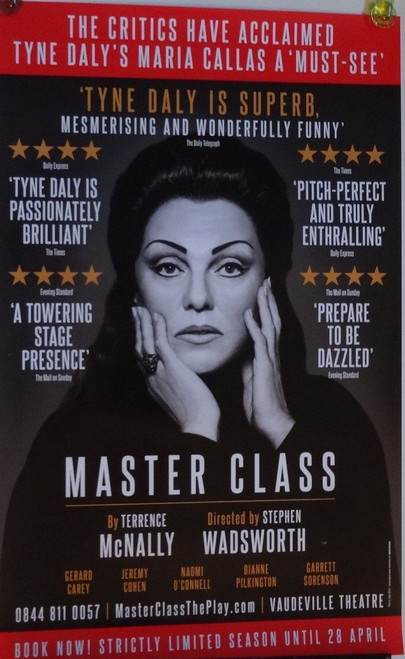 Master Class is a 1995 play by American playwright Terrence McNally, presented as a fictional master class by opera singer Maria Callas near the end of her life, in the 1970s. As such, the play features incidental vocal music by Giuseppe Verdi, Giacomo Puccini, and Vincenzo Bellini. The play opened on Broadway in 1995, with stars Zoe Caldwell and Audra McDonald winning Tony Awards.

Master Class ran at the Kennedy Center from March 25, 2010 to April 18, 2010, directed by Stephen Wadsworth and starring Tyne Daly as Callas. The play was then revived on Broadway in a Manhattan Theatre Club production at the Samuel J. Friedman Theatre, running from June 14, 2011 (previews) to September 4, 2011 for 70 regular performances and 26 previews. Directed by Stephen Wadsworth, the cast featured Tyne Daly as Callas, with Sierra Boggess as Sharon and Alexandra Silber as Sophie. This production transferred to the West End at the Vaudeville Theatre from January to April 2012, with Daly as Callas and Naomi O'Connell as Sharon.