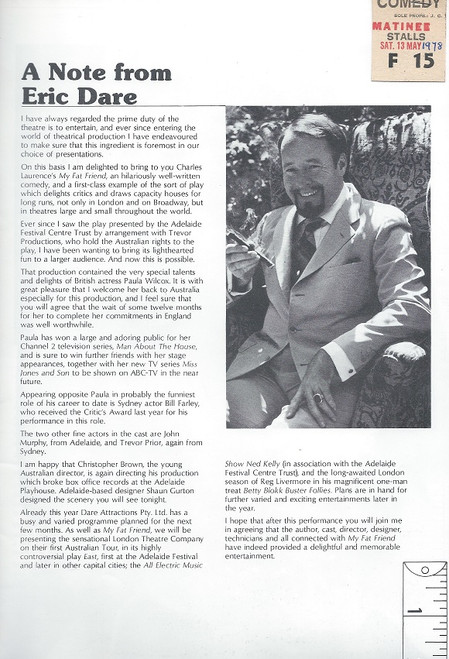 The comedy is an ugly duckling tale about an overweight young woman who attracts the attention of a potential suitor. With the help of her friends/roommates, she undergoes a diet and exercise regime to shed the extra pounds she assumes she needs to lose in order to hold the man's attention.
The play premiered on November 6, 1972 at the Theatre Royal, Brighton, where it ran for one week before transferring to the Rex Theatre in Wilmslow for another week's engagement. On December 6, it opened in London's West End at the Globe Theatre, where it enjoyed a modest run despite lukewarm reviews. The cast, directed by Eric Thompson, included Jennie Linden and Kenneth Williams. John Inman also appeared in the show, before becoming a television star in the BBC department-store comedy Are You Being Served?.
After seven previews, the Broadway production, directed by Robert Moore, opened on March 31, 1974 at the Brooks Atkinson Theatre, where it ran for 288 performances. The cast included Lynn Redgrave, John Lithgow, and George Rose, who was nominated for the Tony Award for Best Featured Actor in a Play and won the Drama Desk Award for Outstanding Performance.

Size 315 x 200 mm  Great Pictures and information of the cast and show.
Condition: Used Good 8/10 Looks Good Original Ticket Stapled on 2 nd page and Print rub mark on cover
(Please Note scans are low res for fast loading)
Each Order will incur a $5.00 handling fee (including free shipping)
All Prices Shown are in USD (United States of America Dollars)
All Payments by Paypal Just Checkout as GUEST no need to register