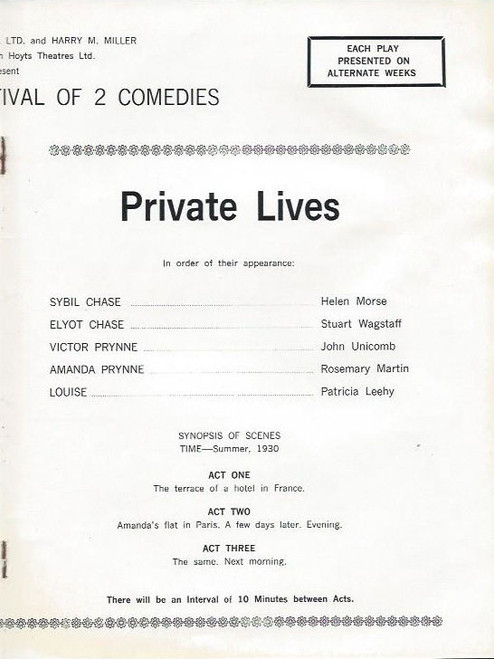 Program/ Playbill Lots of Cast Pictures and Information on Noel

Sir Noël Peirce Coward (16 December 1899 – 26 March 1973) was an English playwright, composer, director, actor and singer, known for his wit, flamboyance, and what Time magazine called "a sense of personal style, a combination of cheek and chic, pose and poise".

Private Lives is a 1930 comedy of manners in three acts by Noël Coward. It focuses on a divorced couple who, while honeymooning with their new spouses, discover that they are staying in adjacent rooms at the same hotel. Despite a perpetually stormy relationship, they realise that they still have feelings for each other. Its second act love scene was nearly censored in Britain as too risqué. Coward wrote one of his most popular songs, "Some Day I'll Find You", for the play.

Present Laughter is a comic play written by Noël Coward in 1939 and first staged in 1942 on tour, alternating with his lower middle-class domestic drama This Happy Breed. Later Coward's new play Blithe Spirit was added to the repertory for the tour.