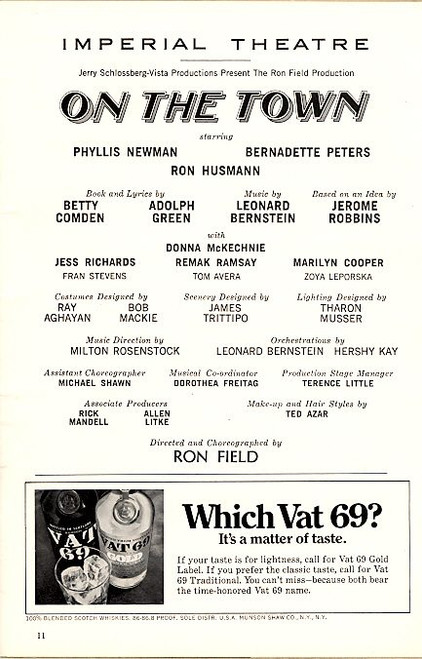 On The Town (Musical)

On the Town is a musical with music by Leonard Bernstein and book and lyrics by Betty Comden and Adolph Green, based on Jerome Robbins' idea for his 1944 ballet Fancy Free, which he had set to Bernstein's music. The musical introduced several popular and classic songs, among them "New York, New York", "Lonely Town", "I Can Cook, Too", and "Some Other Time". The story concerns three American sailors on a 24-hour shore leave in New York City during wartime 1944. Each of the three sailors becomes enamoured of a particular woman — and of the city itself.

On the Town was first produced on Broadway in 1944 and was made into a film in 1949 - although the film replaced all but three of the original Broadway songs with Hollywood-written substitutes. The show has enjoyed a number of major revivals. The musical integrates dance into its storytelling: Robbins made a number of ballets and extended dance sequences for the show, including the "Imaginary Coney Island" ballet.