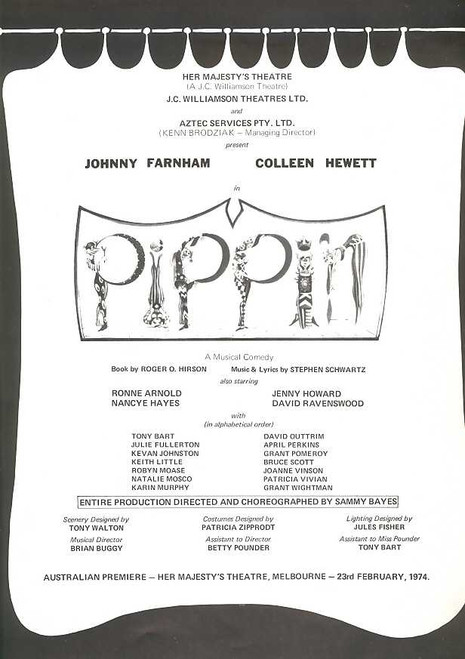 Pippin is a musical with music and lyrics by Stephen Schwartz and a book by Roger O. Hirson. Bob Fosse, who directed the original Broadway production, also contributed to the libretto. The musical uses the premise of a mysterious acting troupe, led by a Leading Player, to tell the story of Pippin, a young prince on his search for meaning and significance.

The protagonist, Pippin, and his father, Charlemagne, derive their characters from two real-life individuals of the early Middle Ages, though the plot presents very little historical accuracy regarding either. The show was partially financed by Motown Records. As of July 2011, Pippin is the 31st longest-running Broadway show. Pippin was originally conceived by Stephen Schwartz as Pippin, Pippin, a student musical performed by Carnegie Mellon’s Scotch’n'Soda theatre troupe.

This Souvenir Brochure is from the 1974 Australian Production, Premiere Melbourne.