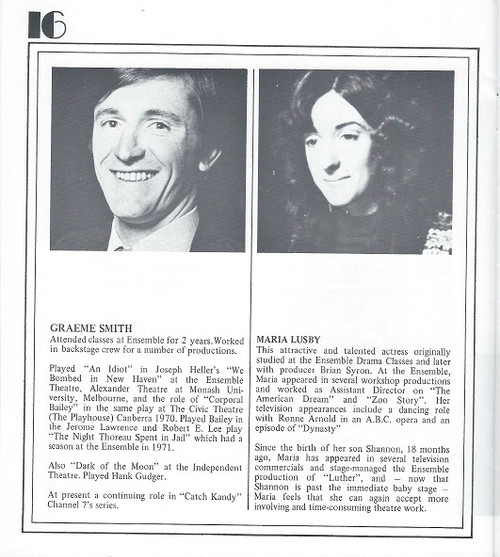 Morry Swerdlin was born in England in 1917 into a typical Jewish family. As he recalls, "My bubbe wore a sheitle and my zeida had a long beard. We kept kosher, not because we necessarily believed or questioned, but because everyone kept kosher. It was simply the way of life." Morry moved to Australia in the 1960's In 1969 Morry re-focussed on his life-long ambition to be a professional writer by attending a creative writing course tutored by the writer Mona Brand. As part of this course he was set an exercise to write a 3 minute sketch as it would be performed on the Mavis Bramston Show, which was then at the peak of its popularity. The sketch was so well received, he was advised to send it to Channel 7. It was accepted, Morry was paid $60 and asked to write further sketches for the show, as well as for its off-shoots, the Mavis Bramston Special and True Blue.
During this time Morry wrote his first full-length play, "Same Difference". After several knockbacks he offered it to Hayes Gordon at the Ensemble Theatre. Gordon immediately picked it up for production in 1972. It was a hit, running to packed houses at the Ensemble for three months. It later played to Melbourne, Perth, Adelaide and New Zealand, before returning to Sydney's Bondi Pavilion Theatre.

"Same Difference" was adapted as a musical for a second season at the Bondi Pavilion in 1994 during which time writer and producer developed an excellent working relationship and friendship. Morry showed Christopher his draft of "Board Decision" which he had begun writing in 1987 and they made the decision to work on it together.