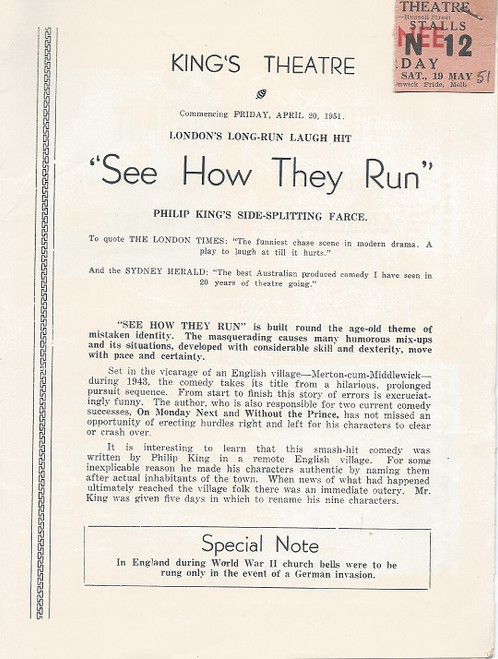 See How They Run! by Philip King

King wrote the first act in 1942 under the title Moon Madness, with the final act completed in 1943. His play was first staged by Henry Kendall at the Peterborough Rep in 1944 prior to a British tour as an entertainment for the troops, under the auspices of ENSA.

The lead character is Penelope Toop, former actress and now wife of the local vicar, the Rev. Lionel Toop. The Toops employ Ida, a Cockney maid. Miss Skillon, a churchgoer of the parish and a scold, arrives on bicycle to gossip with the vicar and to complain about the latest 'outrages' that Penelope has caused. The vicar then leaves for the night, and an old friend of Penelope's, Lance-Corporal Clive Winton, stops by on a quick visit. To dodge army regulations, he changes from his uniform into Lionel's second-best suit, complete with a clerical 'dog-collar' to see a production of "Private Lives" (a Noël Coward play in which they had appeared together in their acting days), while pretending to be the visiting vicar Arthur Humphrey who is due to preach the Sunday sermon the next day.

The Pirates of Penzance - 4