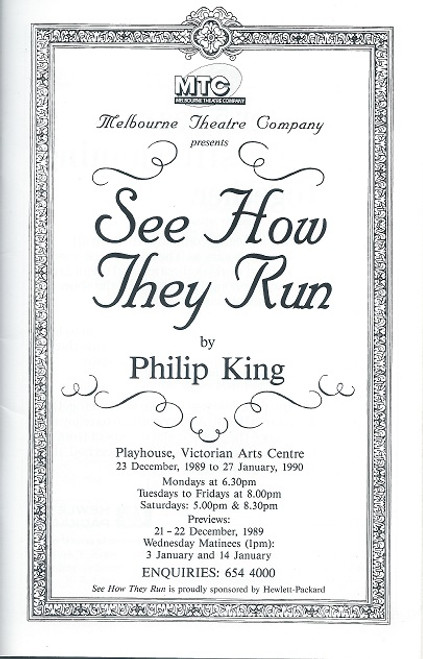 See How They Run by Philip King

The play is set in 1943 for the original (or shortly after the end of World War II in the rewrite) in the living room of the vicarage at the fictitious village of Merton-cum-Middlewick (merging various actual village names, such as Merton and Middlewick, both in Oxfordshire, along with the old British usage of 'cum', meaning 'alongside' in the middle of a village name, as in Chorlton-cum-Hardy).
The lead character is Penelope Toop, former actress and now wife of the local vicar, the Rev. Lionel Toop. The Toops employ Ida, a Cockney maid. Miss Skillon, a churchgoer of the parish and a scold, arrives on bicycle to gossip with the vicar and to complain about the latest 'outrages' that Penelope has caused.

Philip King (30 October 1904 – 9 February 1979) was an English playwright and actor, born in Yorkshire. He is best known as the author of the farce See How They Run (1944). He lived in Brighton and many of his plays were first produced in nearby Worthing. He continued to act throughout his writing career, often appearing in his own plays.