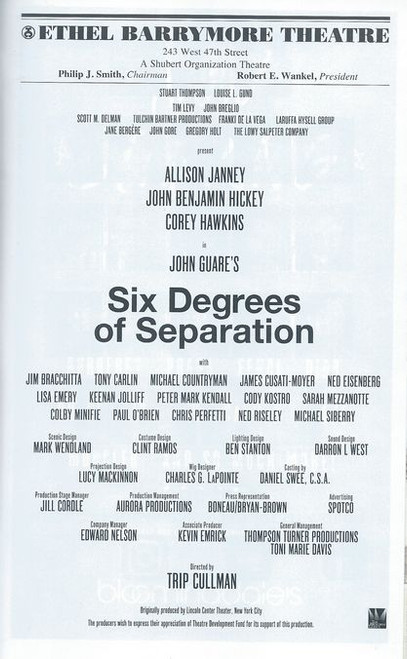 
Six Degrees of Separation is a 1990 play written by John Guare that premiered at the Mitzi E. Newhouse Theater, Lincoln Center on May 16, 1990, directed by Jerry Zaks and starring Stockard Channing. The production transferred to the Vivian Beaumont Theater for its Broadway debut on November 8, 1990. Six Degrees of Separation explores the existential premise that everyone in the world is connected to everyone else in the world by a chain of no more than six acquaintances, thus, "six degrees of separation". The plot of the play was inspired by the real-life story of David Hampton, a con man who managed to convince a number of people in the 1980s that he was the son of actor Sidney Poitier. After the play became a dramatic and financial success, Hampton was tried and acquitted for harassment of Guare; he felt he was due a share of the profits that he ultimately never received.