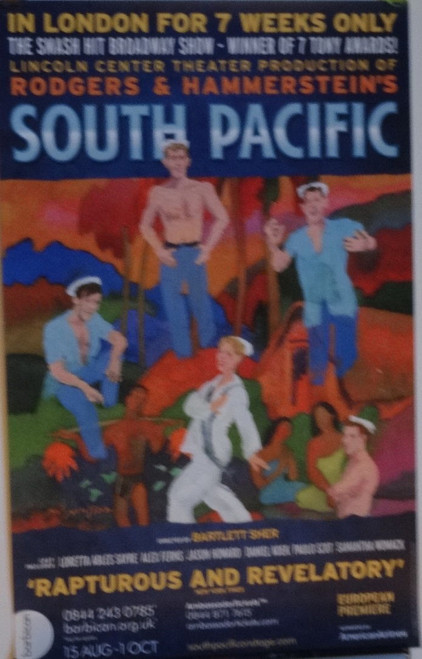 South Pacific is a 1949 musical with music by Richard Rodgers, lyrics by Oscar Hammerstein II and book by Hammerstein and Joshua Logan. The story draws from James A. Michener’s Pulitzer Prize-winning 1947 book Tales of the South Pacific, weaving together characters and elements from several of its stories into a single plotline. The musical won the Pulitzer Prize for Drama in 1950. The issue of racial prejudice was sensitively and candidly explored at a time when few musicals engaged in serious social commentary.

The London production based on the 2008 Broadway revival opened at the Barbican Theatre in London on August 15, 2011 and closed on October 1, 2011.Sher again directed, with the same creative team from the Broadway revival. Szot and Welsh National Opera singer Jason Howard alternated in the role of Emile, with Samantha Womack as Nellie, Ables Sayre as Bloody Mary and Alex Ferns as Billis. The production received mostly positive reviews. A U.K tour followed, with Womack, Ables Sayre and Ferns.